If the Warriors go on to win another title to extend this dynastic run, they might look back on this past weekend as a key inflection point to their young season.

In the span of less than three days, they got two big victories, had a season-defining players’ only meeting and the weight of the world seemed to fall off the shoulders of Klay Thompson.

Heading into Friday night’s matchup against the New York Knicks at Chase Center, Klay was clearly pressing and shooting just 35.1 percent from the field and 33 percent from 3-point land. He tried to shoot himself out of the slump, even at the detriment of his team’s offensive flow, with the frustrations finally bubbling to the surface in Wednesday’s loss to the Phoenix Suns.

Draymond Green isn’t gonna let anything get in his way of a championship. So he called together a meeting Friday morning where the Warriors “addressed the elephants in the room" and had some hard face-to-face conversations.

The two games since? Both ‘W’s for the Dubs, as they showed supreme ball movement en route to 70 combined assists. The connectivity Steve Kerr had been seeking appears to have returned. They are now 5-2 over their past seven after dropping five straight.

Klay looked like his usual Splash Brother self over the weekend, going a combined 22-of-39, including 14-of-23 from 3-point land, in the victories over the Knicks and Houston Rockets. His easy-going 20-point night against the Knicks was just the precursor for his 41-point explosion against the Rockets, which marked his highest point total since April 10 earlier this year.

Klay is known for having hot quarters and he started off Sunday night’s game strong by making his first six buckets, including four 3-pointers, en route to his first 20-point quarter of the season. When Klay is Klay, this team is simply different. What makes this weekend so encouraging for Klay is the manner in which he got his shots. He didn’t force as many attempts and played within the offense, which his teammates and coach Steve Kerr had been not-so-subtly hinting Klay to do.

“Steph been going off all season long,” Thompson said. “It felt good to help him a little bit. It just felt good to have a good game, man. I’m my harshest critic. So, the first 10 games of the season weren’t easy for me. To come out and be myself again, it felt incredible. Like I said, it’s just something for me to build on, keep going.”

If Klay can keep it up, the NBA’s best starting five is even more deadly. It all starts with MVP candidate Steph Curry, who dropped 33 points with 15 assists and put the Rockets to bed Sunday night.

“I surprised myself with that shot,” Curry said. “Moreso the celebration, when the clock was going down, we were running out the clock, me and Draymond put our hands above our heads like we really won something. Just kinda making fun of our slow star on the road. But it was a good win.”

That’s not to say the Warriors have all their kinks worked out. They're 8-9 and have the 11th-best record in the wide-open Western Conference. The young Rockets punked the Warriors in the second quarter Sunday and outscored them 37-21. Somehow, the Rockets turned an 18-point Golden State lead into a nine-point advantage, but the Warriors responded for their first road win. Turnovers and fouls are still a problem, but the movement and mojo of the Dynasty Dubs seems to have returned. 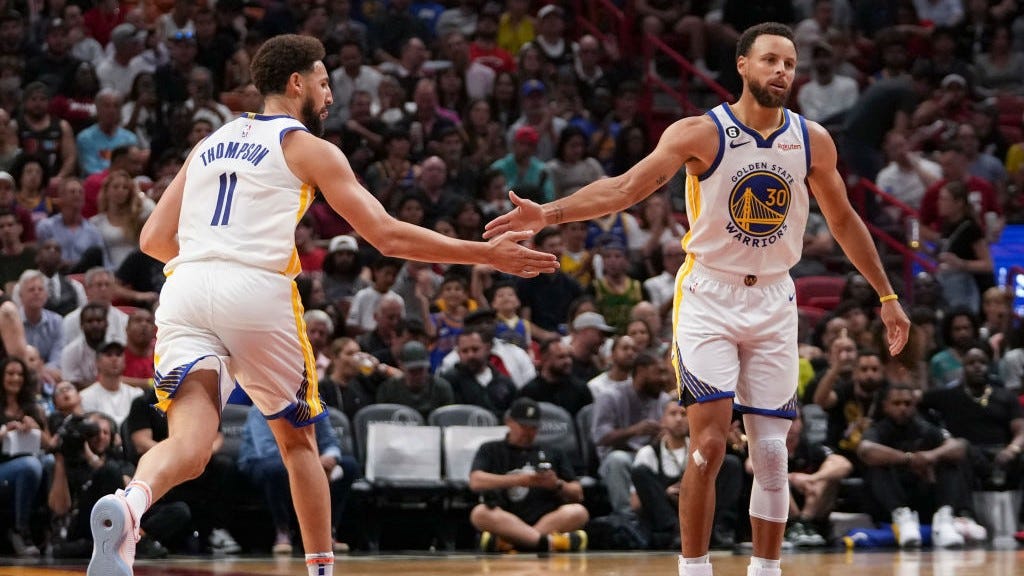