Moses Moody has come a long way this season. Even his ascension in the past few weeks has been remarkable.

After he played 16 minutes in Sunday's Game 3 Sunday's Game 3 109-100 win over the Mavericks in the Western Conference Finals, the Warriors rookie joined 95.7 The Game’s “Willard & Dibs” Monday to discuss his first playoff experience. Check out the full interview below:

“It’s just me knowing I’m finna have to get in and handle up,” Moody told hosts Mark Willard and Dan Dibley. “You can get called on in any minute. Everybody tells you to stay ready, so that’s just a testament to that.”

On a night when veteran forward Otto Porter Jr. exited in the second quarter with a left foot injury, Moody contributions went beyond his one point, one rebound and one assists on 0-for-3 shooting. But Klay Thompson surely noticed Moody’s offensive rebound early in the fourth quarter off a missed free throw, as he dished the ball to Klay for a 3-pointer.

“Mo is incredible,” Thompson said Sunday. “He’s just such a poised rookie. He plays with incredible moxie. He made some really big plays for us. He got me a 3-ball and got me going. He’s just a young man who’s wise beyond his years.”

As recent as early April, the athletic 6-foot-6 wing was in the G League sharpening his skills with the Santa Cruz Warriors. By mid-March, it looked like the No. 14 overall pick had outgrown the G League and established himself as a rotation option for coach Steve Kerr. But with the returns of Draymond Green and Andre Iguodala down the stretch of the regular season, Moody’s minutes dried up so they sent him back down to Santa Cruz.

Well, he’s not playing against the Rio Grande Valley Vipers any more.

For a spurt in the third quarter against the Mavs Sunday night, Moody even found himself on an island with Luka Doncic, as Moody earned Kerr’s trust to go solo in a box-and-one scheme.

Moody’s fellow rookie teammate – Jonathan Kuminga, the No. 7 overall pick – made headlines for most of the season, but he has been riding the bench this series. Moody’s mental maturity is paying dividends, as Kuminga often looked sped up in his playoff minutes.

It’s been quite the season for Moody, who turns 20 next week.

“We have to throw a lot of bodies at Doncic,” Kerr said. “Moses is a tough defender. He’s got good length and strength. And he fights.”

Moody’s minutes have increased from five to 10 to 16 throughout this series after he was limited to garbage time against the Nuggets and Grizzlies in the first two rounds of the playoffs.

After dominating Game 1, Golden State trailed by as many as 19 points in Game 2 before surging in the second half to victory. On Sunday, the Warriors once again finished strong and turned a one-point halftime lead into a nine-point win. No matter the situation, Moody said the Warriors haven’t felt overwhelmed.

“We got Steph Curry and Klay Thompson,” Moody said. “A 20-point deficit doesn't look as intimidating as it might to some teams. At some point, the guys are gonna get hot like that. Even guys like JP (Jordan Poole) and guys like that can get hot and knock down a couple shots and that deficit disappears. We’ve seen it all throughout the year. You know Dray is gonna keep us composed and remind us of the situation and remind us that we good.”

Now the Warriors have a commanding 3-0 lead and Moody is on the verge of capping his rookie season with a trip to the Finals. When it comes to Tuesday’s chance to sweep the Mavericks, Moody said the team is already prepared for everything from Dallas.

“We’ve all been in the playoffs to this point and we know how hard those close out games are,” Moody said. “We’ve actually lost the last two – the first closeout game (to Denver and Memphis) at least. So just knowing that they’re gonna come. They’re desperate. It’s not much more dangerous than a desperate man that’ll do anything.

“Just being on guard, being prepared to take this punch, because I know they’re gonna come out swinging. At the same time, when you’re on your last leg like that and we hit ‘em hard off the beginning, I don’t know how much fight they’ll have.” 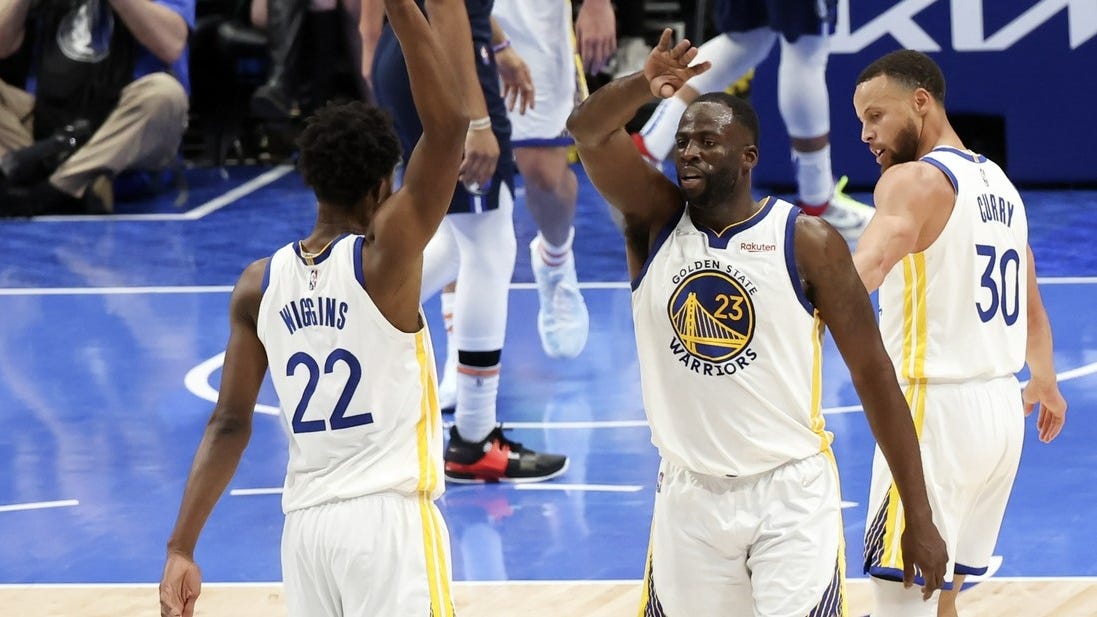 Draymond Green: Warriors had been telling Andrew Wiggins to dunk more 'for years'