When it comes to the greatest teams of all time, the 1996 Chicago Bulls are often given that title within the NBA, but Steph Curry says not so fast.

“Absolutely,” Curry said. “Obviously, we’ll never know. But you put us on paper with them, I like our chances. I say Dubs in six, too.”

Curry's answer was part of GQ's "Actually Me" YouTube video series, where he used a fake Instagram account and other faux social media profiles to interact with fans.

The 2015-16 Warriors actually bested the ’96 Bulls 72-10 record by finishing 73-9, but that season is usually not viewed like the ’96 Bulls’ season because Golden State was unable to finish the job, blowing a 3-1 series lead to LeBron James and the Cleveland Cavaliers in the NBA Finals. Durant joined the Warriors before the 2016-17 season, when they finished 67-15 and won the first of two back-to-back titles.

It’s a near-impossible debate to have and find an answer, too, because the styles and eras of both teams are so different, but it is quite entertaining to imagine Durant, Curry, Klay and Draymond going up against Jordan, Pippen and Rodman.

We’ll just have to figure out if Steve Kerr is on the Bulls bench or if he gets to coach the Warriors. 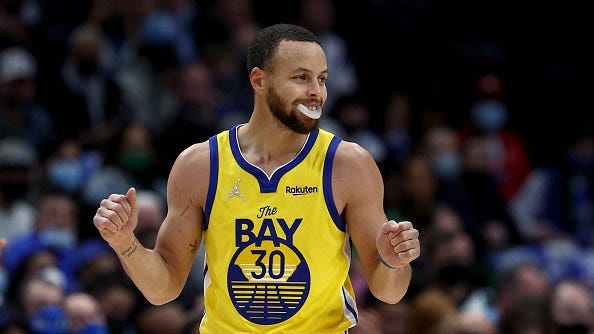