The Cowboys and 49ers haven't kicked off yet … but the gamesmanship is already on.

While Brett Maher was attempting to kick field goals in warmups, some members of the 49ers, including offensive lineman Trent Williams and wide receiver Deebo Samuel, were interfering with the Cowboys kicker's preparations.

The 49ers, obviously very aware of Maher's shaky performance on Monday night when he missed a record-breaking four PATs in one game, wanted to take the opportunity to create more doubts in the kicker's head.

This is what preceded the dust up: pic.twitter.com/FGbVdKbqQh

In videos captured by 105.3 The Fan's Bobby Belt, Williams is seen in a testy exchange with Cowboys special teams coordinator John Fassel, injured long snapper Jake McQuade and punter Bryan Anger, as they attempted to get the All-Pro out of the way so the kicker could complete his warmups.

Mind games between 49ers and Cowboys as Brett Maher warms up: pic.twitter.com/382skSTUmk

49ers kicker Robbie Gould could also be seen diffusing the situation between the parties.

Some words were exchanged between the Cowboys and 49ers players and staff during warmups. pic.twitter.com/EbEickBOxF

Things got even weirder a few moments later when Cowboys owner and general manager Jerry Jones went onto the field and gave Maher a pep talk.

Jerry Jones walks to the field to speak with Brett Maher and holder Bryan Anger. pic.twitter.com/Sci7tYw5O9

In total, Maher went 14 of his 18 field goal attempts in pregame warmups, according to Todd Archer of ESPN. 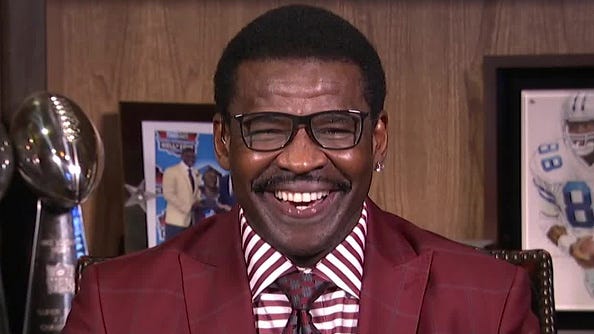