SAN FRANCISO (95.7 The Game) - The San Francisco 49ers will be without running back Raheem Mostert for at least the next eight weeks with a knee injury, and cornerback Jason Verrett will miss the rest of the season with a torn ACL, head coach Kyle Shanahan announced Monday.

Mostert will be placed on injured reserve after an MRI determined that the back had chipped cartilage in his knee. He'll undergo arthroscopic surgery to repair the damage.

Mostert left the game in the first quarter against Detroit after running twice for 20 yards. In his place, 2021 sixth-round pick Elijah Mitchell carried the load and rushed 19 times for 104 yards after Trey Sermon was a surprise inactive for the game.

Jamycal Hasty scored from three yards out on his only rush attempt.

The 49ers had feared that Verrett had suffered a torn ACL and an MRI confirmed it Monday.

Following the game, Shanahan said that cornerback Emmanuel Moseley, who did not play in the game due to a knee injury, and Josh Norman, who was inactive against the Lions after agreeing to a deal last week, could be available to them in Week 2 against the Eagles.

Mostert appeared in just eight games last season after suffering knee and ankle injuries. He missed the final seven games of the 2018 season after fracturing his right arm, and a knee sprain forced him to miss five games in 2017.

Verrett's career has also been marred by injuries, as he has appeared in just 20 games over the last five seasons due to a knee and an Achilles injury. 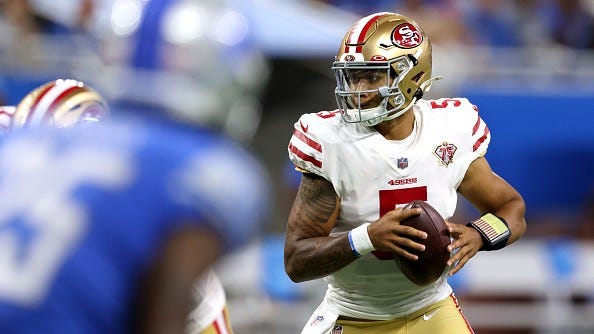