And so ends our happy fun time specubloviating about Jimmy Garoppolo's place in the NFL universe. General manager/offseason face John Lynch just put a shiv in everyone's throat about Garoppolo trade rumors by essentially saying to Clark Judge and Ira Kaufman on the Eye Test for Two podcast that Garoppolo was, is, and will continue to be the San Francisco 49ers' quarterback.

This is not a reversal of opinion; both Lynch and Kyle Shanahan have been relatively steadfast in Garoppolo's defense on simple bird-in-the-hand theory. They have seen a volatile quarterback market, concluded it is more volatile than their cache of assets will allow, and are finally doubling down on the status quo. Lynch did say the team has to improve its supply line of quarterbacks and Garoppolo' health issues, which sounds a lot like they need to make an offensive line that blocks as well for the pass as for the run, but the essential here is that Garoppolo has just been given a commitment that gets in the way of all the gasbagging about his future whereabouts. 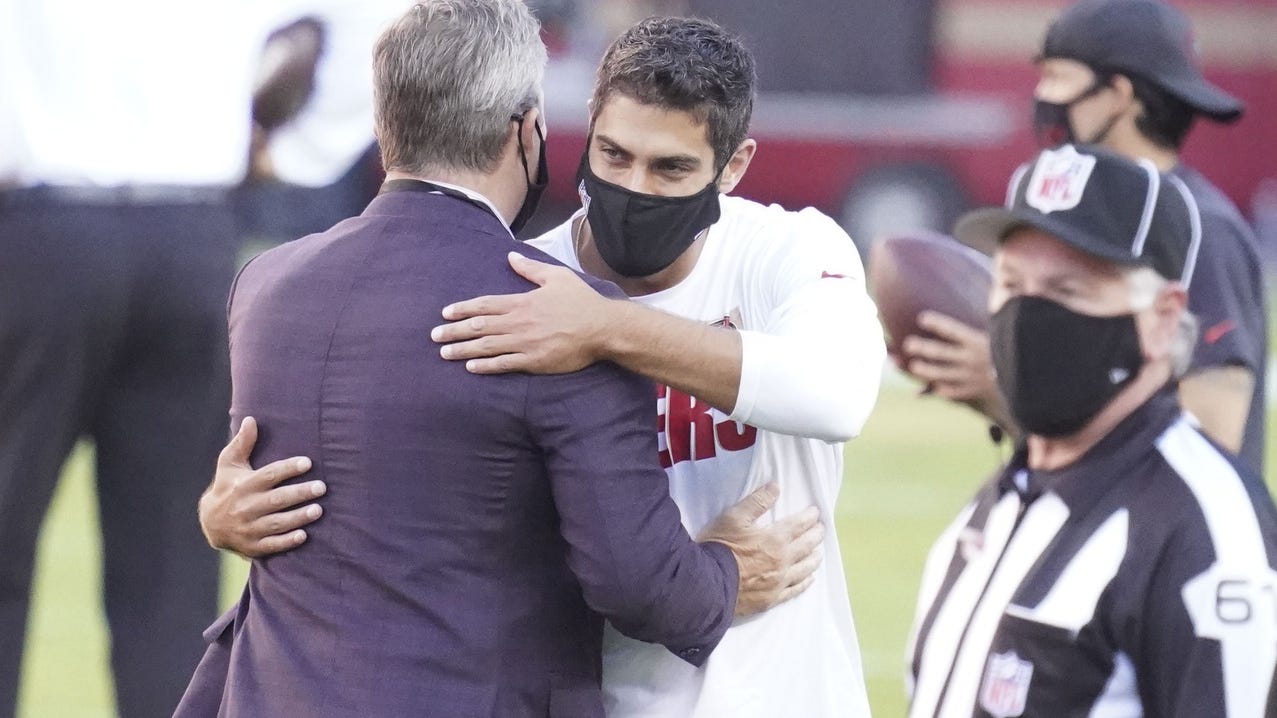 And well, good. Looking at a shopping list is all well and good, but arguing that you need better kale because someone else just pulled good kale from the kale bin tends to become tedious after… well, after the first time you hear the word "kale." Garoppolo has been good enough for this team's needs, and there are other shortcomings that need attending.

Is this to say they wouldn't have ditched Garoppolo if they could have swindled Houston's Nick Caserio out of Deshawn Watson? No. What it means is they have measured the market and see no way to improve the quarterback position without thinning out another area. It means that Shanahan, being the conservative-leaning team-builder he clearly is, has settled on a conservative approach here as well, solely because the outside solutions are either too expensive or too problematic.

And that means that we are going to have to amuse ourselves with the magic of the No. 12 pick in the draft, and free-agent guards and safeties, and other tedious off-season recitations of the roster. Garoppolo trade rumors were a red herring, but it was the only fish in the bucket, and now we have to behave like adults and view this offseason a different way.

Or we can remember that the Warriors are still playing, and the Sharks haven't been eliminated from the postseason yet, and that baseball season is coming, and pretend that Mike Fiers and Anthony DeSclafani are the secrets to the A's and Giants' seasons, if only because talking about the NFL draft is a soul-suck of the first magnitude.

In sum, Jimmy Garoppolo got his name kicked around awhile and then the 49ers finally chased all the neighborhood kids away and said, "Leave him alone." Frankly, we should be good with that. I mean, when Russell Wilson suggests he would be willing to be traded to one of four teams and the Bears and Raiders are on that list and you're not, it's time to stop shopping and go home.