The Julio Jones rumor mill continues to heat up.

According to Mike Florio of ProFootballTalk, the expectation in league circles is that the Falcons will trade Jones to the Titans for a second-round pick.

The report stressed that an offer has not been made nor that the Falcons would accept such an offer — Florio stated that the Falcons still want a first-round pick in return for Jones. But rather this is a “reflection of the current thinking among folks in the know.”

This preceded another report on Sunday from ESPN's Dianna Russini, who said the Seattle Seahawks have had discussions with the Falcons about Jones, and added that Jones and Russell Wilson have spoke with each other about the possibility of playing together.

The Falcons continue to field calls from teams interested in trading for Julio Jones. The Seahawks have had discussions about a possible trade with Atlanta, per sources. In fact, QB Russell Wilson & Julio Jones have spoken to discuss the possibility of playing together.

On Thursday, Russini reported that a first-round pick was on the table amid discussions centering around Jones, which also put the Titans as a ”long shot” to land the veteran wide receiver.

The Titans, along with the New England Patriots, were reportedly the two teams Jones had “his eyes on,” Chris Simms reported last week .The Patriots were believed to be discussing Jones internally, but it was unclear how serious those discussions were.

It is possible a deal could be made at some point this week. The Falcons would save $15.3 million in cap space by trading Jones after June 1, while still on the hook for $7.75 million in dead cap space.

The 32-year-old wide receiver has been among the best wideouts in the league over the last 10 years, but Atlanta is in a rebuilding stage with a new head coach and GM. They also have a new pass-catching target who could become the next star in tight end Kyle Pitts.

Jones also struggled to stay healthy last season, playing in just nine games but still had 51 catches for 771 yards and three touchdowns when he was on the field. 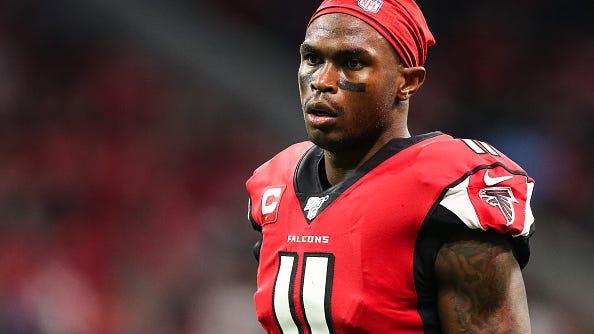