The San Francisco 49ers have made it very clear they plan to get rid of Jimmy Garoppolo.

The Seattle Seahawks apparently are hoping that happens.

Cutting Garoppolo and him promptly signing with a division rival would be the worst-case scenario for the 49ers. Not only would cutting him mean they’re not getting an asset back, but they also would have to face him twice a year.

One of the few teams that has made sense for Garoppolo much of the offseason and into training camp is the Seahawks. They have Geno Smith and Drew Lock, two veterans who have yet to prove they can be full-time starters for a team, in the quarterback room.

Smith apparently has won the job, but that very well might be a smokescreen. Former NFL executive Mike Lombardi said Thursday on his podcast "The GM Shuffle" that the Seahawks are highly interested in Garoppolo.

“I keep asking teams all the time, why don’t they just cut Jimmy G now? And the answer that I got back from multiple teams is 'they don’t want him to go to Seattle'," Lombardi said. "I said, 'Well how interested is Seattle in Jimmy G?' And (one source) said 'Oh, they’re very interested in him.' So for all the talk about Geno, for all the talk about Drew Lock, I think Seattle knows they’re going to get Jimmy G. And I think San Francisco knows that he could go there. So they’re trying everything in their power to prevent that, and they have no takers.

“So what I think will happen is the Friday before the opening weekend, I think they’ll cut Jimmy G. I think that’s when they’ll cut him, and then he’ll have to go do his contract and go up to Seattle and go there. But there is no interest in allowing Seattle to have even a week of preparation with Jimmy G to come in as their starting quarterback. But I do believe, reliably reported to me, that Seattle is the team that wants him.”

This would actually help explain Kyle Shanahan’s sudden change this week, saying that “any scenario is possible” with respect to Garoppolo, leaving the door open for him to stay. Maybe they know that there’s strong interest with the Seahawks and would prefer to just roster Garoppolo as an expensive backup as opposed to him going to Seattle.

At the same time, it’s probably fair to wonder if Garoppolo ending up with the Seahawks would actually boost Seattle so much that it would suddenly threaten the 49ers. The Seahawks finished 24th in the NFL last season and had some huge offseason departures. Garoppolo might not be impactful enough of a player to drastically change their fortunes.

Time is running out for the Niners to cut Garoppolo with minimal financial penalty, so there will be some sort of resolution in the not-too-distant future. 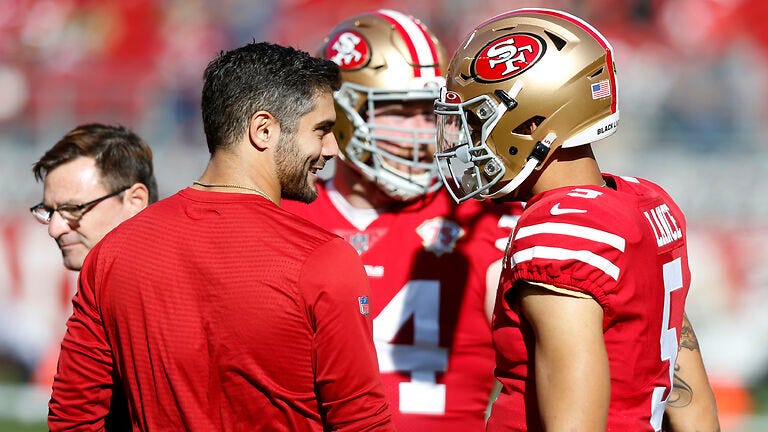