A painful torn ligament and chipped bone in his throwing thumb didn't prevent San Francisco 49ers quarterback Jimmy Garoppolo from delivering some late-game magic when his team needed it most. With an NFC postseason spot on the line last weekend, he battled through significant discomfort, throwing for 316 yards in a thrilling comeback win over the rival Los Angeles Rams.

Although Garoppolo's future with the 49ers is uncertain -- rookie quarterback Trey Lance will eventually take the reins -- he'll start at least one more playoff game, this time on the road against the Dallas Cowboys in a wild-card battle. Since it's possible that Garoppolo's thumb hampers San Francisco's offense this Sunday, former NFL quarterback Joe Theismann is hoping that the team doesn't ask him to do too much.

"I think Kyle Shanahan's one of the great playcallers in this game. And Jimmy's never going to really light it up down the field -- that's not who he is. But it's a methodical offense," Theismann told the Reiter Than You show on Thursday. "They're going to have to run the football. You're not going to be able to drop back against that front and think you can throw 45 passes against them.

"You're going to need the running game to create the passing game, to allow Jimmy to do the things that he needs to do. Remember, they came back from a 17-point deficit last week. They know they can get it done, but they're going to have to pick and choose spots... It's a question about getting first downs, taking points when you get them, letting your defense go do their job as well."

On Wednesday, Garoppolo -- who was limited in practice -- told reporters that his thumb held up well against Los Angeles, and it's "feeling great right now." The 30-year-old suffered the injury in a Week 16 loss to the Tennessee Titans, when defender Denico Autry slammed him to the turf. Garoppolo only missed one game, and if not for his gutsy performance last weekend -- the 49ers out-scored the Rams, 24-7, after halftime -- the team would be golfing.

In 15 games this season, Garoppolo completed 68.3-percent of his passes for 3,810 yards with 20 touchdowns and 12 interceptions, and his passer rating of 98.7 ranked ninth-best in the NFL. Dallas and San Francisco are scheduled to kick off at 4:30 p.m. ET, and according to FiveThirtyEight, the 49ers currently have a 31-percent chance to advance to the divisional round and a 2-percent chance to reach Super Bowl 56.

The entire NFL conversation between Theismann and Reiter can be accessed in the audio player above. 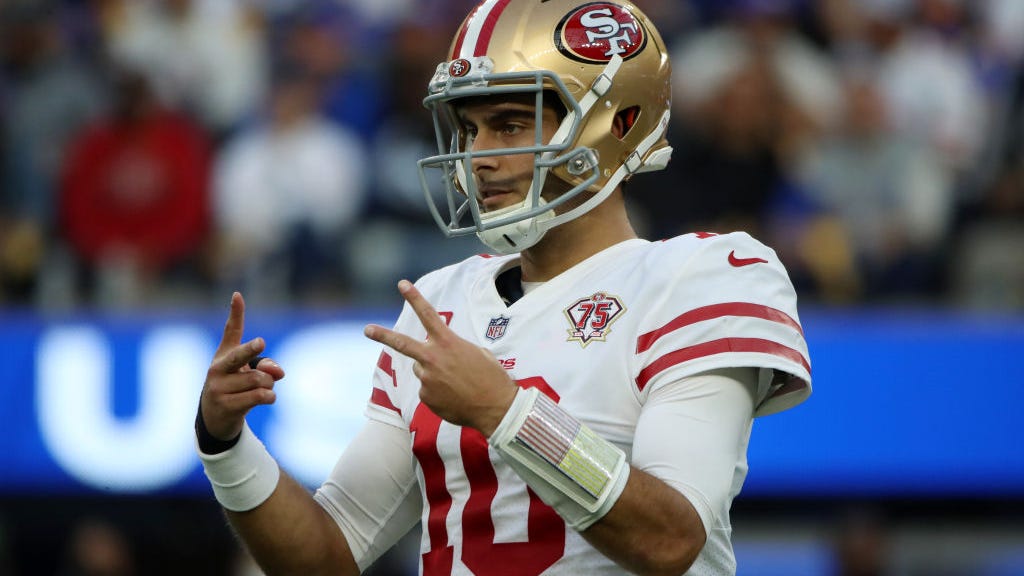 Jimmy Garoppolo admits uncertain future has loomed over him all season