The San Francisco Giants’ hot start to the season has helped reignite their rivalry with the Los Angeles Dodgers, which had some more flavor added to it on Sunday.

In the first inning, with Clayton Kershaw on the mound, Giants shortstop Mauricio Dubòn crushed a two-run home run just inside the left field foul pole to give San Francisco an early 3-0 lead.

As Dubòn crossed home plate he raised his arms and pretended to sheath a sword — mocking a celebration Dodgers right-hander Trevor Bauer had done a week earlier when he struck out Alex Dickerson on a check swing.

The Giants are all over Clayton Kershaw early 💣 pic.twitter.com/3dmgVAMq7b

Dubon did the Trevor Bauer sword celebration after homering off Kershaw ⚔️ pic.twitter.com/SJp1wnhxBv

For what it’s worth, Bauer’s celebration is also a hat-tip to Rob Friedman, who runs the popular Twitter account @PitchingNinja. Freidman often tweets “and sword” or a sword emoji whenever a batter tries to check his swing.

It is not the first time Bauer has been mocked by players of the opposing team.

Earlier this season, Fernando Tatis Jr. rounded first base after homering off Bauer and turned to the dugout covering his eye — a callback to the time the reigning NL Cy Young Award pitched a spring training outing with one eye closed.

Bauer has embraced it, though, and believes the game should be more fun and have moments like that.

Dubòn’s celebration certainly accomplished that and should make for more potential celebrations and unique moments in Giants-Dodgers games throughout the season. 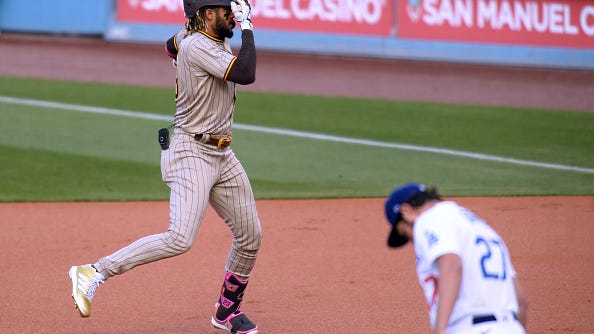