Trevor Bauer is all for more celebrating and entertainment in baseball, but he says players are doing it all wrong.

Following the Dodgers’ 5-4 loss to the San Francisco Giants on Sunday — in which Giants shortstop Mauricio Dubòn trolled Bauer with the sword celebration on a home run — the right-hander fired back on Twitter, although it appeared to be more in jest than starting a serious beef.

Dubòn’s home run came off Clayton Kershaw, not Bauer, while the other part of the tweet was directed toward Padres star Fernando Tatis Jr., who covered his eye after homering off Bauer to mock him for pitching with one eye closed in a spring training game.

After the Tatis celebration, Bauer had said he has no issue with it and, despite calling the two hitters “fools,” reiterated his stance in a reply to his former teammate, Mike Clevinger.

I love it too haha it’s awesome and wildly entertaining. We gotta work with your boy @tatis_jr though on how to properly execute the one eye celly. Gotta actually hit with one eye closed if you’re going to use it 😂😂 https://t.co/Y2wCu4OWl2

This led Bauer to propose an idea to MLB fans: If Bauer is the “owner” of the sword and one-eye celebration, he suggested players then challenge him for it prior to the game, with the winner owning the right to do the celebration.

Question for the fans: should we turn celebrations into something like the BMF belt? For instance, I’m currently the owner of the sword and one eye celly. If someone else wants it, they have to challenge me for it before the game. Then whoever wins keeps the celly too. Yes? No?

The Dodgers pitcher compared it to the BMF (bad mother you know what) belt in UFC — which was created after Nate Diaz proclaimed himself the “baddest motherf----er” in the sport, and challenged Jorge Masvidal, who defeated Diaz to claim the title.

The logistics on how a player could steal a celebration from Bauer probably still need to be worked out. If someone like Tatis goes 1-for-3 with a home run and a strikeout, who lays claim to the celebration? Does Tatis get it after the home run but Bauer gets it back after the strikeout?

As much of a lightning rod Bauer could be, he certainly is not afraid to think outside-the-box to keep the game fun. 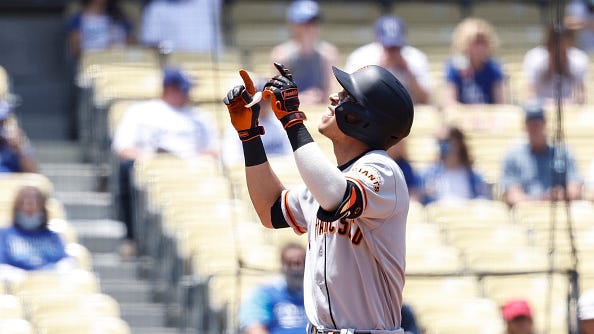