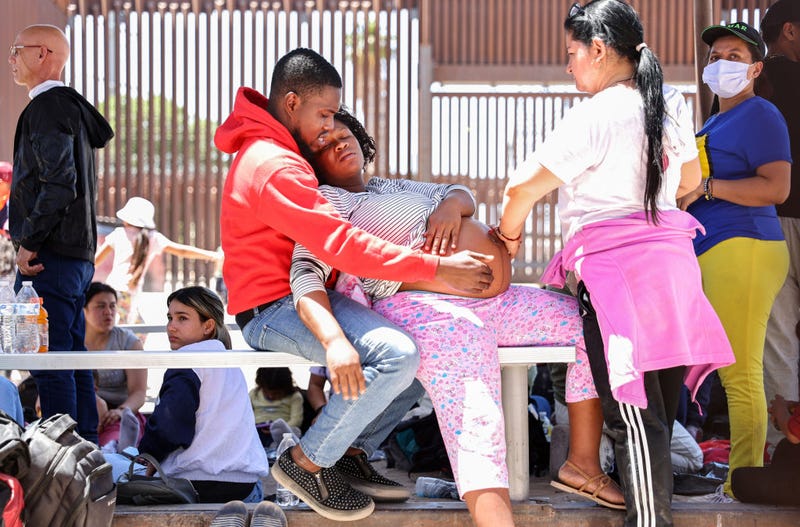 A pregnant immigrant from Haiti is assisted by her partner and another immigrant while having contractions, after she crossed from Mexico, with the U.S.-Mexico border barrier in the background, on May 21, 2022 in San Luis, Arizona. A U.S. Border Patrol agent soon opened a gate in the border barrier to allow paramedics to reach her, while was still technically in the United States. She had been stranded behind the barrier with other immigrants, some of whom said they had been waiting for two days to be picked up by Border Patrol. Title 42, the controversial pandemic-era border policy enacted by former President Trump, which cites COVID-19 as the reason to rapidly expel asylum seekers at the U.S. border, was set to officially expire on May 23rd. A federal judge in Louisiana delivered a ruling yesterday blocking the Biden administration from lifting Title 42. Photo credit (Photo by Mario Tama/Getty Images)
By Lauren Barry, The Marc Cox Morning Show, and Marc Cox, 97.1 FM Talk

Shortly after a judge ruled in favor of Louisiana and other states that filed a preliminary injunction against the U.S. Centers for Disease Control and other government agencies for attempting to end Title 42, the Department of Justice announced it would appeal the decision.

Title 42 was instituted during the first months of the COVID-19 pandemic – before vaccines were available – in 2020 to suspend the introduction of persons in the U.S. and control viral spread. The Biden administration planned to revoke Title 42 effective Monday.

According to department spokesperson Anthony Coley, the CDC “invoked its authority under Title 42 due to the unprecedented public-health dangers caused by the COVID-19 pandemic.” Now, the CDC has determined, “in its expert opinion, that continued reliance on this authority is no longer warranted in light of the current public-health circumstances.”

However, Judge Robert Summerhayes of Louisiana agreed Friday with the states’ suit that calling the proposed revocation “the abrupt elimination of the only safety valve preventing this Administration’s disastrous border policies from devolving into an unmitigated chaos and catastrophe.”

A statement from the White House issued Friday said President Joe Biden and the administration “disagrees with the court’s ruling,” and argued that public health policy should be set by the CDC rather than courts.

“However, in compliance with the court’s injunction, the Biden Administration will continue to enforce the CDC’s 2020 Title 42 public health authority pending the appeal,” the White House explained. “This means that migrants who attempt to enter the United States unlawfully will be subject to expulsion under Title 42, as well as immigration consequences such as removal under Title 8.”

Going forward, the Department of Homeland Security will continue planning for Title 42 to be lifted as the appeal process proceeds.