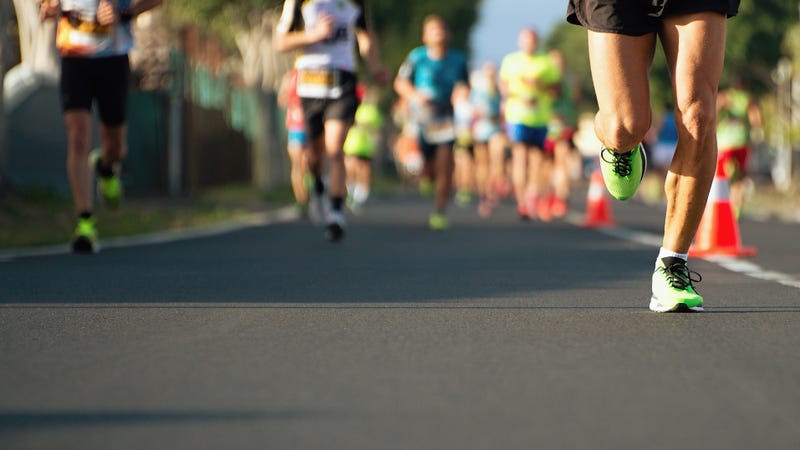 The Cincinnati Flying Pig Marathon took place last Sunday, May 1, and out of the thousands who participated in the race, it was clear to many that one runner was too young for such an intense event.

A 6-year-old boy from Kentucky ran the entire 26.2 mile race, despite the full marathon's minimum age requirement of 18, and many voiced their opinions online saying that he never should have been allowed to run.

The young boy completed the race in about 8 hours and 35 minutes, and ran alongside his entire family -- his parents and five siblings, ages 11, 15, 17, 19 and 20, according to Fox station WXIX.

The family, the Crawfords, are from Bellevue, Kentucky and claim to be the largest family to have hiked the Appalachian Trail. They wrote a book about their journey and have a strong social media following with just under 50,000 subscribers on YouTube and about 12,000 followers on Instagram.

Long-distance runner Kara Goucher, a former U.S. Olympian, took to Twitter after hearing about the 6-year-old running a marathon, and was one of many who questioned if it's right for someone that young to participate in it.

"I don't know who needs to hear this but a six year old cannot fathom what a marathon will do to them physically," Goucher tweeted. A six year old does not understand what embracing misery is. A six year who is 'struggling physically' does not realize they have the right to stop and should."

"I'm not questioning motivation or saying it is bad parenting," Goucher added. "But as an Olympic athlete, I promise you this is not good for the child. Children are children. Let them run around, but as the parent you need to protect their growing bodies and their young minds."

I'm not questioning motivation or saying it is bad parenting. But as an Olympic athlete, I promise you this is not good for the child. Children are children. Let them run around, but as the parent you need to protect their growing bodies and their young minds.

Ben and Kami Crawford posted a response to the backlash on Instagram, making it clear that they "have never forced any of our children to run a marathon."

"On May 1 our family of 8 finished an entire 26.2 mile marathon. This is the first marathon our entire family has run together," the post's caption said. "Our 5 older kids waited for over an hour at mile 25 and after 8 hours and 35 minutes we all crossed the finish line together. After 2 days celebrating with friends, how we spent our day has got a lot of attention from some who are accusing us of being irresponsible and even abusive. To that end I'd like to lay out a few facts for the public conversation.

"1. We have never forced any of our children to run a marathon and we cannot even imagine that as feasible practically or emotionally. We have given all of our kids the option for every race. Last year two kids ran it without us. In 9 years we have been awarded a total of 53 medals - mostly to the kids."

The parents went on to explain that their 6-year-old had been begging to run the race with the rest of his family, and after agreeing, they did everything they could to make sure he was safe and hydrated throughout the event.

"This year after begging to join us we allowed our 6 year old to train and attempt it. Both parents gave him a 50/50 chance of completing it and were ready to pull the plug at any moment if he requested it or if we viewed his safety at risk. We asked him numerous times if he wanted to stop and he was VERY clear that his preference was to continue. We did not see any sign of heat exhaustion or dehydration and honored his request to keep on going."

Iris Simpson Bush, race director for the Flying Pig Marathon, explained the situation that allowed the 6-year-old to run the marathon, and responded to the criticism through a statement, according to ABC station WCPO.

"The Flying Pig Marathon takes the safety and security of all participants very seriously," Bush said. "We receive numerous requests for special accommodations each year and carefully evaluate each. Our goal is to provide a positive race experience for all participants while supporting them along the course. The Flying Pig Marathon was founded on the ideal of hosting a world-class road race experience and we will always strive to do so.

"Please allow me to share the reasons for the decision to allow a minor to participate in this year's race. This decision was not made lightly. The father was determined to do the race with his young child regardless. They had done it as bandits, in prior years, before we had any knowledge of it and we knew he was likely to do so again."

The term "bandits" refers to someone that participates in a race, but is not officially registered, according to The Cincinnati Enquirer. The race director went on to discuss the "safety and protection for the child" and took responsibility for allowing it to happen.

The intent was to try to offer protection and support if they were on our course (Medical, Fluid and Replenishment)," Bush said. "Our decision was intended for some amount of safety and protection for the child. The family finished the race after the formal closure of the course.

"I assume full responsibility for the decision and accept that it was not the best course of action. Our requirement of 18+ for participation in the marathon will be strictly observed moving forward."