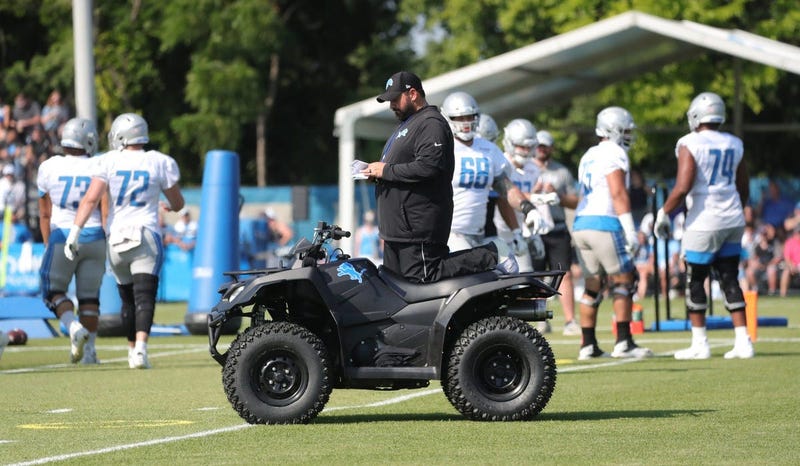 Matt Patricia had one message for P.J. Johnson during practice on Tuesday, and another for the rest of the team.

After Johnson, a seventh-round pick out of Arizona, got steamrolled to the ground during 11-on-11 reps, he stood up and began shoving a Patriots player. That led to a small fray in the middle of the field, with players from both teams coming together.

Patricia quickly drove up on the crowd in his ATV to calm things down, then threw Johnson out of practice with a firm gesture toward the locker room. As Johnson slowly walked off the field, Patricia told the rest of his players to stay locked in.

"Just continue to compete," said rookie linebacker Jahlani Tavai. "That’s the biggest message that he’s trying to get across. That’s our job, and we’re going to make sure that we do that."

Such scuffles are common during joint practices. Tuesday's skirmish was the first between the Lions and Patriots, who will practice again on Wednesday before kicking off the preseason Thursday night at Ford Field.

Asked if Patricia told the players to eliminate the contact after the whistle, Tavai said, "I mean, it’s football. There’s always going to be pushing and shoving. But like I said, the biggest message we got today was just keep competing."

There was an extra edge to Tuesday's practice compared to Monday's. That tends to happen as the players continue to clash. And with emotions starting to run hot, it was probably only a matter of time before someone boiled over.

"It’s two really competitive teams," said Matthew Stafford. "We love to go out there, compete and accept any challenge, and I know they’re the same way. In the same breath, we know how to practice. It never gets too far out of hand. Little bit here and there today, but nothing that you ever felt was really going to escalate. Just good, hard competition."

When Johnson crossed the line, it cost him.

"It's always going to get a little chippy in there, but you just have to have that passion in you," said Tavai. "Just have to be smart about it next time."