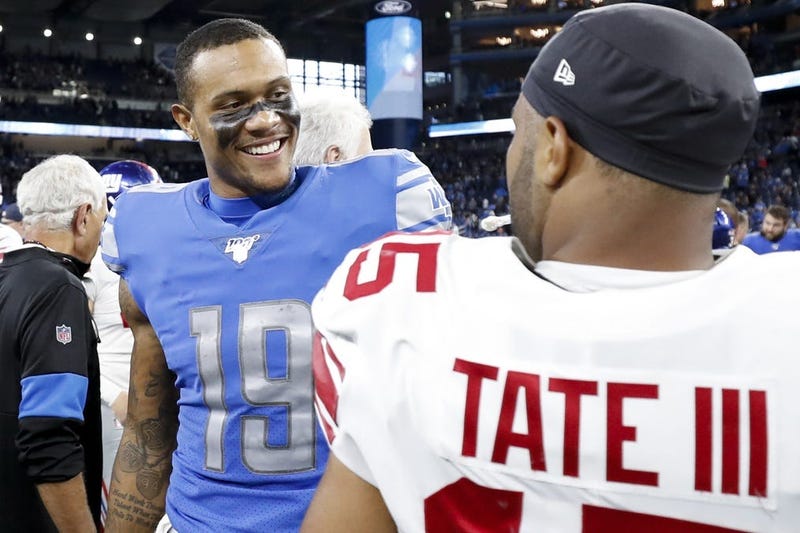 No one thought a whole lot of Kenny Golladay when the Lions took him in the third round of the 2017 draft. Then Golladay showed up, and Golden Tate thought even less.

After watching his former teammate torch another defense on Sunday in the Lions' win over the Giants, Tate couldn't help but smile.

"I’m gonna be honest," Tate said. "When he first got there, I was like, this dude is not very good. But he quickly, quickly changed that. His work ethic, he showed up wanting to be good. His first year he showed some glimpses of being amazing, his second year he did amazing, and third year he’s just thriving. It’s been fun to watch him grow."

Tate's vantage point is different these days, shifted by last season's trade. But he had a front row seat to Golladay's development for the first several months of his career, and he's not surprised where his career is headed. That initial impression wore off pretty quickly.

"By training camp," Tate said. "And that first game, didn't he do something crazy?"

Yep, two touchdowns in a Lions' win, including one that made highlight reels around the NFL.

"Diving catch," Tate recalled. "I was like, okay, this guy is the real deal."

If there was an appeal to Golladay when he arrived, a little-known receiver from Northern Illinois, it was the combination of his speed and size. It didn't take him to long to flash his hands and flex his muscle. He put it all on display Sunday, catching six passes for 123 yards and two touchdowns, his third 100-yard game of the season. His six touchdowns are tied for the NFL lead.

Golladay took a major step last season, producing down the stretch in an offense decimated by injuries. If that was an indication he could be the Lions' No. 1 receiver, his performance this year has been proof.

Best receiver on his team?

"That guy can be the best receiver in the league," said Tate. "He’s had all the talent in the world. His route running’s getting better each year, his knowledge of the game is getting better each game, I think that offense is putting him in a position to succeed. Obviously he can run by you, he can go up and get the ball."