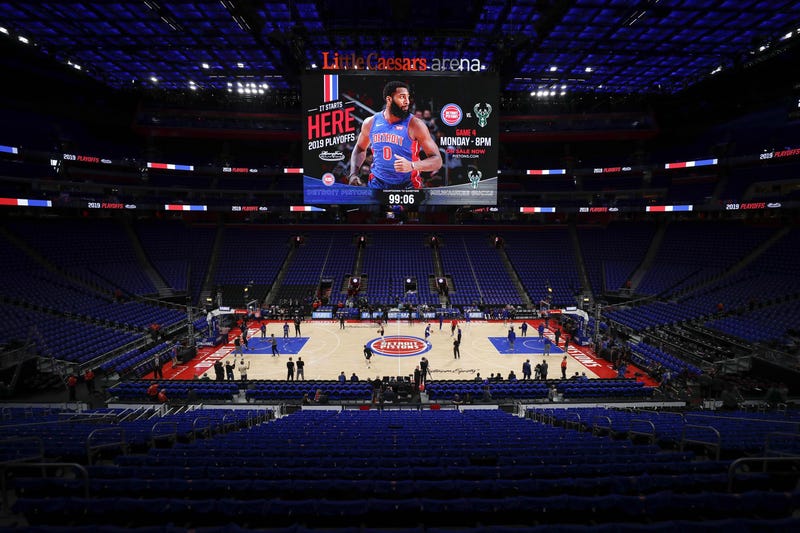 It took two years and two teams, but Little Caesars Arena got its first taste of the playoffs Saturday night. If the Pistons didn’t deliver, the building most certainly did.

And remember, this was no foregone conclusion.

Those concerns were loudly put to rest, even as the Bucks ran the Pistons out of the gym for the third straight time in this series.

It was clear before tip-off that Saturday night would be different. The fans arrived early and eagerly filled the seats, even those in the typically-empty upper deck. They roared when the lights went dim for player introductions, 20,500 strong, reaching a crescendo in the dark when John Mason bellowed the name of B-B-B-Blake Griffin.
And when the Pistons raced out to a 7-2 lead, the crowd briefly harkened back to those glory days in the Palace. There were white thunder sticks, blue t-shirts being waived in the air and full-throated cries of Deeeeeeetroit Basketballlllll. The electricity surged for most of the first half, as the Pistons fought to keep pace with the NBA’s best team.

Griffin’s first basket, a determined put-back of his own miss, was met with a collective pound of the chest that echoed around the arena. Detroit’s 14-4 run early in the second quarter that cut the deficit to one put a quivering charge in the air. And Thon Maker’s emphatic rejection of Giannis Antetokounmpo a few minutes later sent the fans into a tizzy.

A late push by the Bucks cut out the power, but by then Little Caesars Arena had proven its point. There’s a soul beneath its shiny bones. And if the Pistons fan base was dormant for much of the past two seasons – and really, for longer than that – it’s desperate to wake up.

This crowd had no illusions about its team's shot in this game and in this series. These are fans that know basketball. And they packed the house and cranked the volume anyway, just because they had the chance.

“We had a great crowd,” said Dwane Casey. “This is one of the best crowds we’ve had all year.”

With due respect to Casey, he’s wrong. This was hands-down the best crowd Little Caesars has seen in two years of operation, Red Wings games included. It has never been louder. What Saturday night proved is that one day it will be, maybe as soon as Monday night. The first playoff game is one thing. The first playoff win is another.

“You looked up to the top row and it was filled, and that’s what we’re here for,” Casey said. “That’s what we’re growing to do. We’re trying to get our program where Milwaukee is. I remember going into Milwaukee two years ago (with the Raptors), they were at the same stage we (are now).

“That’s growth. That’s continuing to be consistent. And that’s what we’re building here.”

If and when they put the pieces into place, the Pistons, rest assured, will have a home to back them up.