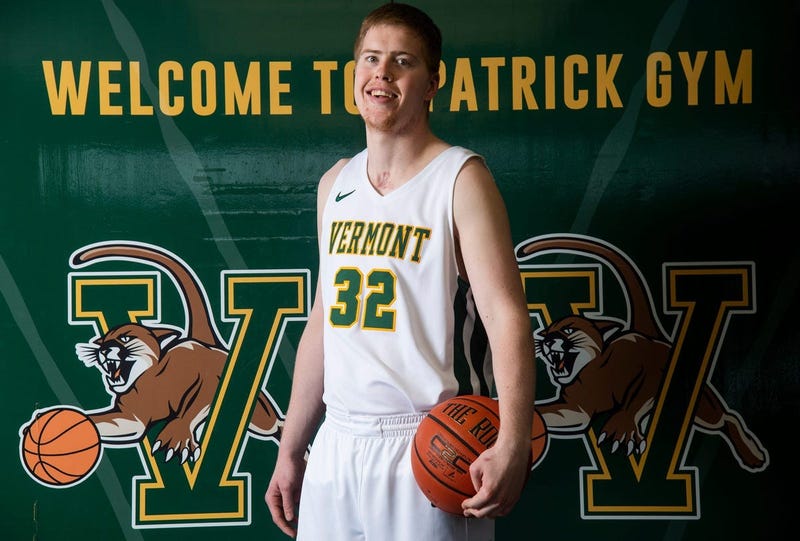 97.1 The Ticket -- In 2015, Josh Speidel was an Indiana high school basketball star, about to head off to burgeoning mid-major Vermont to start his collegiate career.
But his plans changed dramatically when he was in a car crash on Super Bowl Sunday in 2015, one that nearly claimed his life. The 6-foot-8, 215-pound Speidel suffered a traumatic brain injury that left him in a coma for several weeks.

Speidel has had a long road to recovery, learning how to walk and talk again.

Growing up in Indiana, nearly every young kid dreams of playing Division I college basketball. On Tuesday night, five years after the crash, Speidel finally got to realize that dream.

He took the court with the Catamounts against Albany for his first ever college game. UVM coach John Becker and Albany's Will Brown had decided prior to the game that Speidel would get a free walk to the basket, bringing forth an emotional moment inside Patrick Gym in Burlington, Vermont.

Here’s the best thing you’ll see tonight.Vermont senior Josh Speidel gets the first start of his career and the first points of his career.Speidel was a highly touted UVM recruit before a car accident in high school left him in a coma. Incredible story in Burlington. pic.twitter.com/kWInlKqFZF

Vermont's Josh Speidel was a highly touted prospect before a car accident derailed his college career.Tonight, on Senior Night, he scored his first basket on the first possession of the game -- pic.twitter.com/ZyOBXj7dw5

It's moments like this that remind us sports are more than just sports. They're a vehicle for some of life's greatest moments.