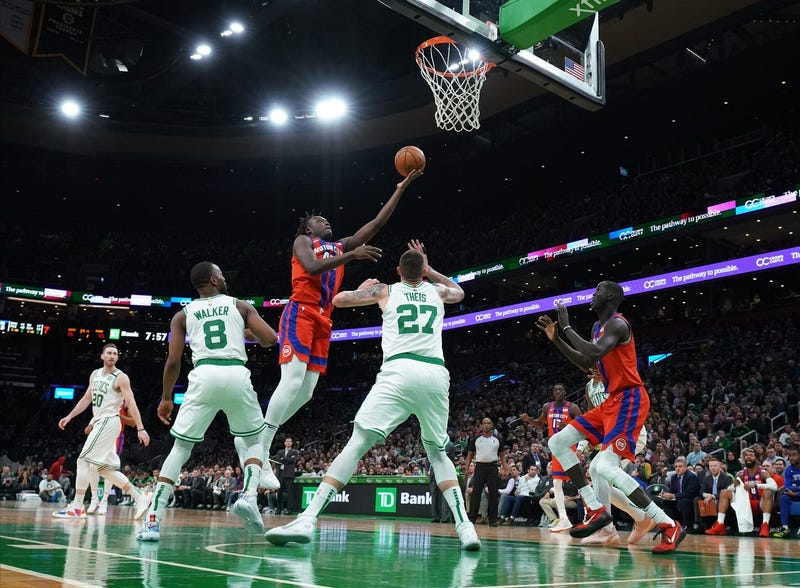 First it was the dunk -- you know the one. It soon became the matchups. And on Wednesday it was the grown-man performance against one of the best teams in the NBA.

Since entering the Pistons starting lineup two weeks ago, 19-year-old Sekou Doumbouya has put the NBA on notice. The youngest player in the league looks like he's here to stay.

"That’s the Prince," Markieff Morris said after Doumbouya scored an easy 24 points Wednesday night to lead the Pistons over the Celtics. "You’re going to see in about five years, he’s going to have Detroit on his back, man. I can almost promise you that."

At the risk of sending expectations through the roof -- and we apologize here to Pistons coach Dwane Casey, who's been trying hard to control the hype  -- let's look at the last time a player this young, this inexperienced, and this wildly athletic entered the NBA. That's right, let's look at Giannis Antetokounmpo.

And Giannis, like Sekou, arrived in the NBA at the age of 18. They're both December birthdays, just a couple weeks apart. In his first NBA start, Giannis scored 10 points. Guess how many Sekou scored in his?

The Bucks lost that night, and would lose for most of the season. So it was, and so it will be for the Pistons. But Antetokounmpo was the light on Milwaukee's horizon, a light that grew brighter over the next two seasons. In year four, he earned his first trip to the All-Star Game. By year five, he was firmly established as one of the best players in the game.

And in year six, at the age of 24, Giannis Antetokounmpo was named MVP.

"The NBA, the speed and quickness of our league, is something he has to get used to," Casey said Wednesday. "He’s developing right before us. Again, he's got a ways to go. Don’t want to overreact, but I like what his future holds. … He’s done a heck of a job for a young kid."

Through eight starts, Doumbouya's averaging 14.0 points, 5.3 rebounds, and most promisingly, shooting over 41 percent from three. That last part was supposed to take time; it probably still will. But the early impression has been a welcome surprise.

It's not just from deep. The rookie has been efficient across the floor. His 14.0 points per game have come on fewer than 10.0 attempts from the field. On Wednesday he became the second youngest player in NBA history to score at least 24 points while shooting 75 percent from the field, second to a dude named Kobe.

“That boy gets buckets in his sleep,” said Tony Snell.

As for those matchups, the list just keeps growing. It started with Kawhi Leonard, continued with LeBron James, and on Wednesday included Jaylen Brown and Gordon Hayward. Doumbouya has relished each one. He told us his defense was special the night of the draft, and now he's showing us why. He has the length and quickness to guard almost any player on the floor.

And he has the confidence to believe he'll win.

Princes, though? Princes are fine. For the Pistons, a prince is needed. It's been a while since they've had one, and Casey would like us to remind you that Sekou is a long way from assuming his crown. His teammates would like you to know he's got the goods to get there.

"Prince over there, he’s been doing a great job as a starter," said Morris. "He’s bringing the energy. He’s changing things around here."

The difference goes beyond nights like Wednesday, when the Pistons won a game they weren't supposed to. It goes beyond the dunk and the defense. For a long time, it felt like this team didn't have a future. With Sekou, it feels like the future has arrived.