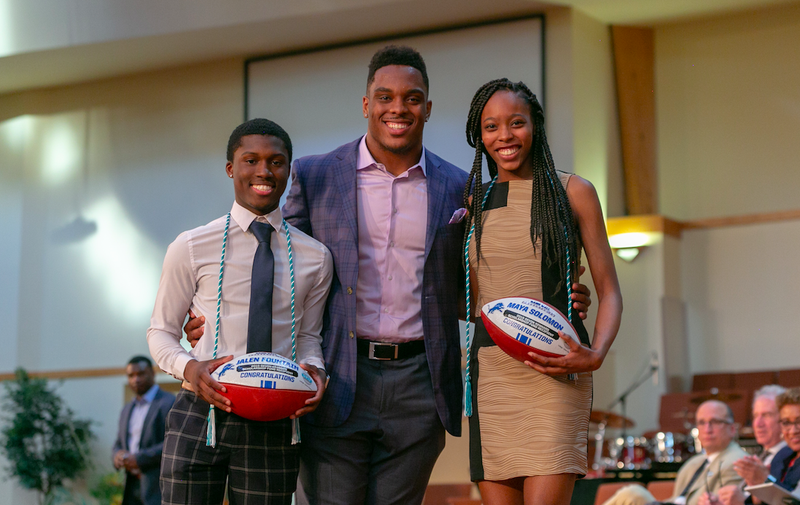 Photo credit Courtesy of Detroit Lions
By Will Burchfield, 97.1 The Ticket

A few weeks ago, for a few afternoons in a row, Devon Kennard sat down to read. This is nothing new. Kennard, a starting linebacker for the Lions, calls reading his “No. 1 hobby.” He’s not talking about quarterbacks and offensive schemes. Books and podcasts are Kennard’s version of downtime, that commodity so rarely afforded to players in the NFL. The USC grad has two degrees, including a master’s in communication management, and an obsession with learning more. Indeed, there’s always more to learn.

But on this occasion, Kennard wasn’t crawling into a book. He was diving into more than 40 essays sent to him by high school seniors in the Midnight Golf Program, an afterschool program that propels underserved students in metro-Detroit to college and, ultimately, to professional careers. The program works. 99 percent of its graduates since it was founded in 2001 – this year’s class featured nearly 250 students – have enrolled in college or a post-secondary experience.

When Kennard arrived in Detroit last offseason, he began looking for ways to embed himself within the community. He wanted specifically to work with kids. The Lions introduced him to MGP, which Jim Caldwell actively supported during his tenure with the team, and Kennard was hooked. He would eventually establish a $10,000 scholarship fund to be split between two graduates of the program based on an essay contest, with Kennard choosing the winners.

The prompt: Tell me about a book and the impact it’s had on your life.

So here he was, reading through essays, one at a time, and learning about the students behind them.

“It really blew me away,” Kennard said.

Blown away? Let’s talk about blown away. That’s how Reneé Fluker, founder and president of MGP, felt when she met Kennard last summer. The man has that effect. He’s 6’4, 265 pounds and somehow makes the person he’s talking to feel larger. He’s all-in on every word, and the world is suddenly reduced to right here. Conversations matter to Kennard. That first time he sat in on an MGP session to get a feel for the program, Fluker had a feeling he’d be sticking around.

“I knew the second I met him. As soon as he walked in that door, I just automatically thought he was Midnight Golf,” Fluker said. “I just thought he was part of our family, like he was one of the kids that grew up in the program.”

It’s just – it’s just something about him.

“His giving and his presence,” Fluker went on. “He had this, like, ‘I want to help this program’ (attitude). You don’t see a lot of people like that, and we have a lot of important people in Detroit. But when he walked in that door it was, like, oh my god, this is where I’m supposed to be.”

Kennard felt something similar. He watched the way the students interacted with each other. When they broke into small groups, he watched the way their mentors stepped in. Kennard comes from a stable community and a nurturing family. He enrolled at USC on an athletic scholarship. He understands most kids aren’t so lucky. But these kids in front of him, and the mentors behind them, didn’t much care. Obstacles weren’t going to arise out of circumstance.

“They were making points that I didn’t even think about that kids have to go through,” Kennard said. “But if they’re the first ones in their family to go to college or they just don’t know how that process works, then they’re losing out on opportunities just because they’re ill-informed. Hearing what was talked about, I just left extremely impressed. And I wanted to get involved in it.”

An offshoot of Midnight Basketball, an initiative launched in the 90’s to keep at-risk youth off the streets, the Midnight Golf Program has turned into something much more than its namesake. Underserved students with college aspirations go through a 30-week curriculum from October to May, with three-hour sessions twice a week after school. They work closely with their mentors – successful professionals in the Detroit area – to sharpen the kind of tools they’ll need in the next stages of their lives. The golf lessons along the way are an invitation to a world brimming with valuable connections.

Since the inception of MGP, 2,500 participants have enrolled in college. They’ve attended schools like Stanford, Georgetown and Brown; locally, Michigan and Michigan State. Seventy percent of those students have earned their degrees within four to six years, a rate four times higher than their Detroit peers. Each year, the graduates of MGP gather for a commencement ceremony where scholarships are awarded to help mitigate the costs of college.

Blown away? That’s how the crowd packed into Detroit’s Fellowship Chapel for this year’s ceremony sounded when Kennard, at the end of a brief speech on stage, revealed he had two $5,000 scholarships to hand out. There were wide-eyed glances and whistles of disbelief. There were oohh’s and aahh’s, like those you hear during the grand finale of a fireworks show. And then there was unanimous applause, some 1,500-strong, the students occupying the chapel’s most prominent rows and their family members and friends fanned out on the wings.
Courtesy of Detroit Lions

Hundreds of scholarships had already been awarded this evening, most of them between $500 and $1,500. These two were the biggest from an individual donor – a distinction Kennard didn’t take lightly. When it came time to judge the essays, he could have pawned them off to someone else. He could have skimmed them over and plucked a couple winners at random. And on graduation day, he could have sent someone to speak on his behalf. The money would have been received just the same.

Instead, Kennard read each one, then circled back to those he liked best. When it became too close to call, he reached out to MGP to look over the students’ transcripts. He reviewed their grades and their plans for college.

“I really took my time,” he said. “I felt like it was a significant amount of money that could bless a kid, and I wanted to make sure I chose the best candidates.”

“Can you imagine?” she said. “You’re a football player like him and you’re reading the essays? He doesn’t have to be here, he doesn’t have to do this. But he knows that we care about these kids.”

Blown away? Well, give Jalen Fountain credit. He did his best to play it off cool. When Kennard announced his name to the crowd, Jalen calmly rose from his seat on the aisle of the pew and strode toward stage. Upon reaching the foot of the steps, he stopped and waited for the next winner to be called. If he hadn’t admitted it later, one would never have known he was shaking.

“Literally nothing was going through my head. I just remember that I could feel my heart outside of my body. I felt it through my whole system, just pounding,” said Jalen, holding out his arms as the aftershocks raced through him. “I didn’t know what to do.”

Jalen, a senior at Cass Tech deciding between Tennessee State and Eastern Michigan, wrote his essay on How ‘Bout That for a Crack Baby. It’s the story of a young man from Detroit who was born with drugs in his system, absentee parents and brothers who were selling dope, and willed himself down a better path. Jalen has had a chance to meet him; he’s a mentor at Cass. In his essay, which Jalen worked on painstakingly with his English teacher, he discusses the value of perseverance.
As he spoke, Jalen twirled a football in his hand, signed by Kennard. Both winners received one. He glanced down and studied it now and then, as if to confirm this was all real. It was going in a case when he got home, Jalen said, in his bedroom. Where no one else can touch it.
Will Burchfield

Blown away? Maya Solomon had every reason not to be. She had made more trips to the stage than anyone in her class this evening, winning scholarships by the handful. But this one was different. She didn’t realize when she applied for it how much it was worth. When Kennard announced her name after Jalen’s…

“I was thinking, ‘I applied to this, but I thought it was going to be, like, $500. But he added a whole zero,” said Maya, beaming. “I was just shocked.”
Maya, a classmate of Jalen’s going to Florida A&M, wrote her essay on Michelle Obama’s autobiography Becoming. The former First Lady blazed the kind of trail Maya intends to follow, from humble beginnings to inspiring change in her community. College and law school are steps along the way. One day, Maya intends to start a MGP scholarship of her own. Take her at her word.
When Maya reached the stage, Jalen escorted her up the steps. This was all too perfect. The two of them are close friends, the type that share inside jokes. As they stood next to each other and posed for photos, Maya turned to Jalen and said, “Bro, we did this!”

Kennard has already committed to renewing his scholarship fund next year. Now that his family is settled in to the local area, he plans to be more involved with the mentoring portion of the program as well. And he has ideas of holding a fundraiser for MGP with some of his teammates. And he plans to host some of the students at a Lions game, as he did last year for a MGP family on Thanksgiving. (Kennard also provided the family Thanksgiving dinner.) Kennard is a fast talker, his gears always spinning, but his pace picked up even further as he considered all the possibilities. He never stopped smiling.

“I wanted to find a way to make (Detroit) feel like home as soon as possible,” he said. “And this has helped that become true.”

Blown away? Kennard looked around the chapel after the ceremony was over, at the hundreds and hundreds of people the Midnight Golf Program touches every year. Jalen glanced down again at his football, trying to understand how someone who’s “not from here” could immediately invest in “something that he wasn’t even a part of.” Maya burst into a smile, one even wider than before, at the idea that Kennard planned to read the book she wrote about. And Fluker shook her head, because for all the amazing people involved with MGP, has she ever had someone – “Not like him,” she answered.