Taylor Decker returned to practice last week after missing the first five weeks of the season due to a finger injury, but his return to game action remains an unknown.

Dan Campbell said Tuesday he's not sure how close Decker is to reclaiming his job at left tackle ahead of the Lions' Week 7 clash with the Rams.

"Having him, he’s got game experience, he’s a talented player and I think it could help. Now, I don't know. I don’t know where he’s going to be at," Campbell told the Stoney & Jansen Show. "Until he mentally feels like it’s something he can do, something that he feels comfortable with, something that he knows he can perform and play at a high level, then it’s not worth it. You gotta know you can do it and you can function because if you can’t, it’s not worth it."

Decker went through two workouts last week with a cast on his left hand before sitting out practice Friday. The Lions have two more weeks to either activate the six-year vet from injured reserve or shut him down for the season after starting his 21-day evaluation period last Wednesday.

"Right now we’ll see where it goes, we’ll have him out there and see how he feels," Campbell said. "But in the meantime, Matt Nelson’s our right tackle and (Penei) Sewell’s our left tackle and nothing will change until we know for certain that he’s ready." 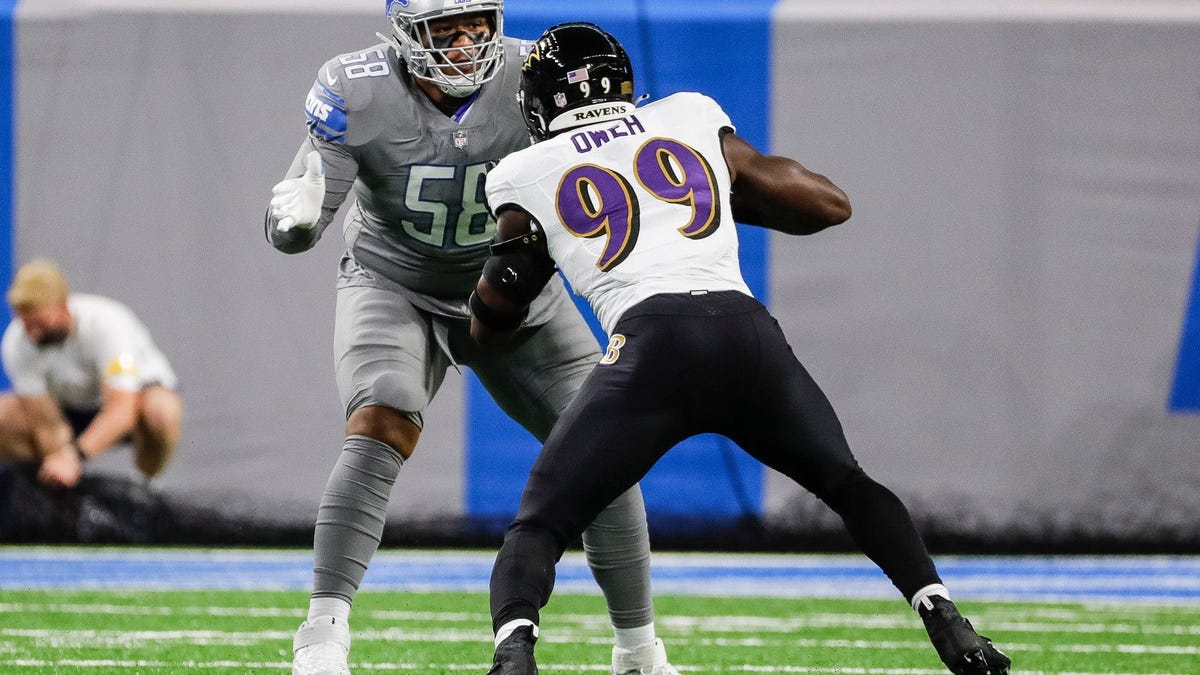 Lions sticking to plan with Sewell as Decker nears return

Sewell's coming off one of his better games of the season, but the Lions could certainly use Decker against a Rams defense that ranks third in the NFL in sacks (18) and opponent passer rating (81.6). Jared Goff has a passer rating of 86.9 through six games.

"I know this sounds crazy, but they’re the least of our concerns right now," Campbell said. "Until we can fix our own issues, particularly offensively, we’re not going to move the ball against them until we figure out our own – well, forget figuring it out. We know what it is. We can’t have these mental errors and these penalties that are just crushing us, because we have to be able to stay even with the sticks or close enough to where our odds are much better of getting another first down. And when we don’t, we struggle.

"Look, I've said it before: we have to play almost perfect to have a chance. And that’s possible, but man, not the way we’re going right now. So we gotta really home in on what we do. It’s another game for (Goff). He just needs to be able to direct our offense. Just run what we’re asking you to run, man. Be efficient in our offense, make the throws that are there. You don’t have to be Superman."