After the Lions' passing attack went from bad to worse and Jared Goff injured his oblique in a 16-16 tie to the Steelers, Detroit has good reason to consider a change under center. But Dan Campbell sees no such change coming. He said Monday that Goff remains "the guy that gives us the best chance" to win.

Goff threw 25 times against Pittsburgh for a total of 114 yards. Part of this was by design as the Lions leaned on the run on a rainy day. It was also a continuation of Goff's season-long struggles trying to push the ball downfield. He now ranks third to last in the NFL in yards per attempt and second to last in yards per completion.

At this point, why does he deserve the job as QB 1 in Detroit?

"It’s hard to say that he shouldn’t be the guy right now," Campbell said. "It’s hard to say that, man. Because, there again, every time we try to throw it in drop-back, just about, our protection breaks down. Until we can do things right around him – now, there’s throws we want to see that he needs to make. There was a dart that we threw to (Kalif Raymond) that he should make and he’s pissed off about it, too. But ultimately, I still think right now he’s the guy that gives us the best chance."

After watching Goff and Detroit's offense sputter throughout the first half of the season, Campbell made a point to get more involved on that side of the ball. He took over play-calling duties from OC Anthony Lynn coming out of the bye, speaking directly into Goff's helmet Sunday in Pittsburgh. He said the plan was "to take shots early," until the game and the weather dictated a more run-heavy approach.

"We took one (to Raymond in the first quarter) and we didn’t get it, but there’s also pressure in his face when he’s trying to throw it. So that comes up, and then you end up in one of these games with weather and you realize you’re running it well and you’re going to continue to run it," Campbell said.

The miss to Raymond came on the play in which Goff suffered what he called a "sprained oblique." Campbell said Monday that Goff's "a little sore" and that the Lions will know more about his health by Tuesday. Campbell stuck with Goff on Sunday because Goff said he could go and Detroit's trainers agreed. Goff said the injury bothered him but it wasn't a hindrance in his play.

"If I felt like there was no way he could function, then I would (take him out)," Campbell said. "But I didn’t feel that way." 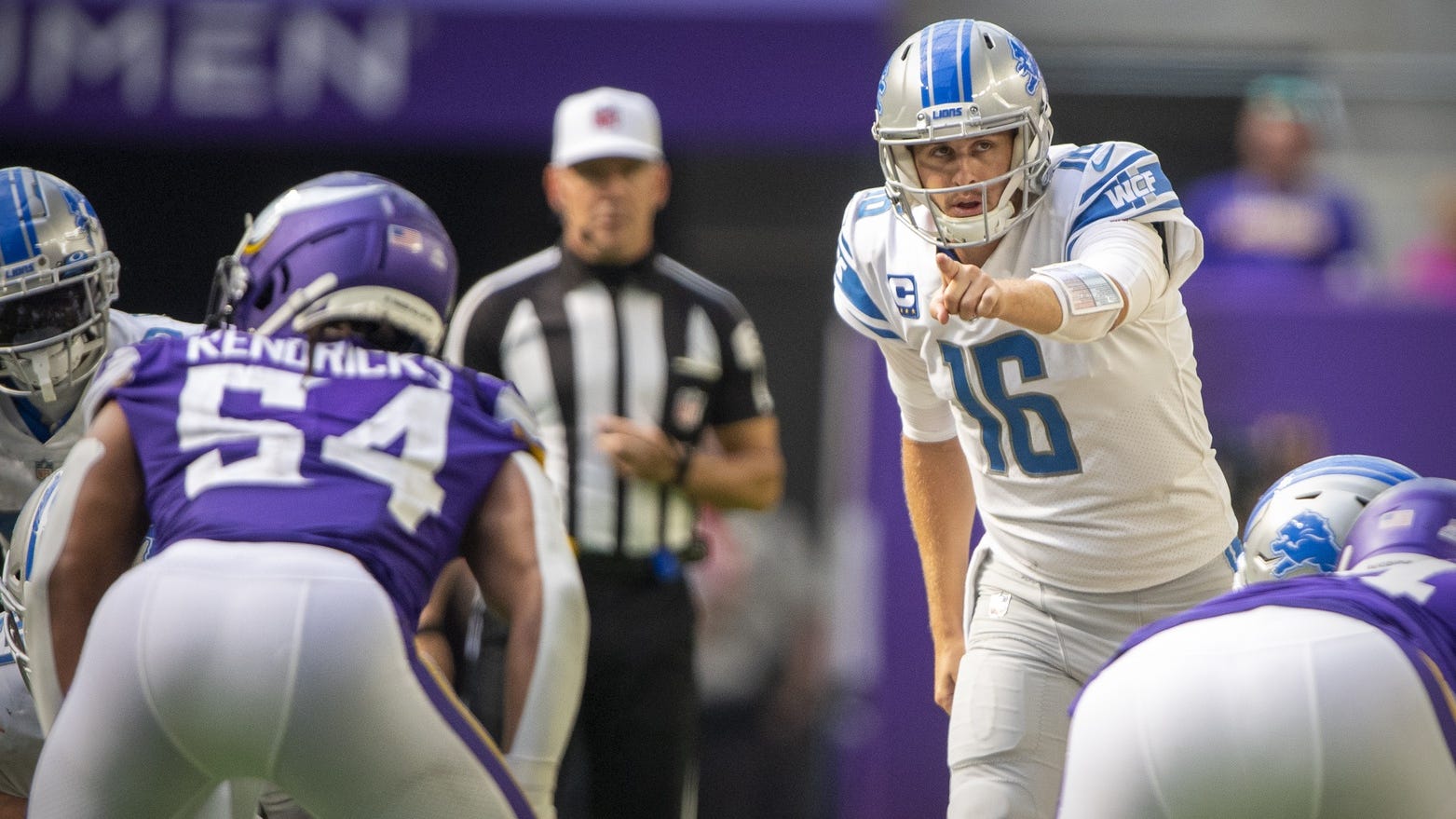 As much as anything, the Lions are sticking with Goff because of the alternative. His backup, David Blough, has a passer rating of 64.0 in five career starts. Perhaps the outlook changes if and when Tim Boyle returns from the thumb injury he suffered in training camp after signing a $2.5 million deal with the Lions last spring.

Campbell also said "the communication went well" with Goff in Campbell's first game as primary play-caller, "just getting it into him so that he could get into our offense and we’re up to the line and functioning fast." He also credited Goff for making the right pre-snap decisions for a rushing attack that put up 229 yards. That's another reason Campbell stuck with the beleaguered vet over Blough.

"He did a good job with all the checks and kills, everything that we had in for the run game," Campbell said. "He handled all that stuff well. So as far as that goes, it ran smooth and efficient."

If Goff's injury demands it, the Lions will make a change at quarterback. We'll know more in that regard as the week moves on. But unless the team begins to play better around him and Goff continues to struggle, it sounds like he'll remain QB 1 -- for at least a couple more months -- in Detroit.