Like Lions new general manager Brad Homes, new head coach Dan Campbell --who introduced himself in a fiery press conference on Thursday -- is a big fan of Matthew Stafford.

And like Holmes, Campbell isn't tying himself to Detroit's franchise QB.

Asked if he'd like to build around Stafford moving forward, Campbell said, "That’s another one we’re going to talk about. I need to sit down with Brad. I mean, we’ve had discussions.

"But here’s what I would say about Matthew: man, he’s a stud. Alright? He’s a stud. He is one of the toughest quarterbacks you’ll ever see. He’s extremely talented. I know he’s a team guy. And listen, I know he wants to win. So I'll leave it at that."

This is the biggest decision facing Campbell and Holmes as a new era of football dawns in Detroit. Is Stafford their guy? Or is it time to move on? Campbell offered a peak into his perspective when asked if excellence at the QB position is necessary to win in today's NFL.

"I think the short answer to that is, no," he said. "But your odds go way up of having success when you find one of those guys. Look, this is a passing league right now. It just is. The numbers that are being put up grow every year in the pass game. That’s certainly an important piece that every team needs. You look at the greats, and these teams that have had success throughout the last few years, have a quarterback. They have a quarterback in place they feel like they can lean on and they’re gonna be able to rely on for a long period of time. Certainly, that’s important.

"Do you have to have it? No, but tell me who the other guy is then, as to who’s going to serve that role. I think it’s like anything else. If you don’t have something, if maybe you’re lacking in one area, you better beef up another. You better find a way to build on those things around what maybe you don’t have, so you can give yourselves the best chance to win."

Conventional wisdom -- and recent history -- says you need a high-level QB to win in today's NFL. Look at the four teams playing this weekend. Each one is led by a quarterback who posted a top-10 passer rating this season: Patrick Mahomes (108.2) and the Chiefs, Josh Allen (107.2) and the Bills, Aaron Rodgers (121.5) and the Packers and Tom Brady (102.2) and the Bucs. Mahomes, Allen and Rodgers comprised three of the top four. (Stafford ranked No. 14 at 96.3.)

At the same time, lesser quarterbacks have won the Super Bowl in the past several years. That includes Nick Foles with the Eagles in 2017, a broken-down Peyton Manning with the Broncos in 2015, Joe Flacco with the Ravens in 2013 and Eli Manning with the Giants in 2012. To Campbell's point, those teams were elite in other areas. 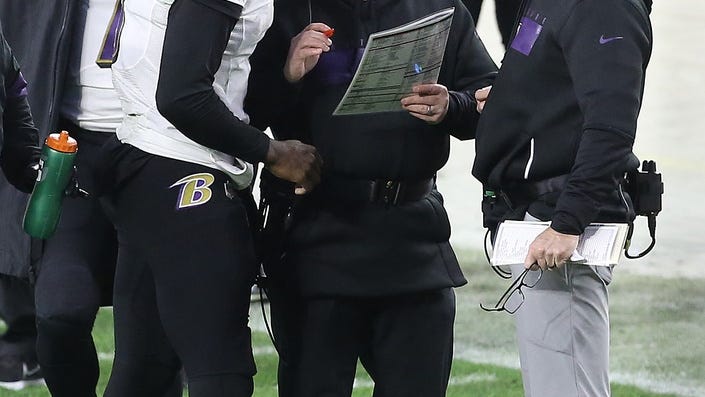 Campbell doesn't hide the fact that he wants to run the football. It's part of the tough, physical mentality he wants to bring to Detroit, much like his predecessor. What does that mean for Stafford? We'll see. Campbell said he's "open to anything right now" at the QB position, including potentially drafting one seventh overall this spring. But the conversation is just getting started.

"Look, there’s a million avenues you can go with the quarterback talk," he said. "This is just too early right now to talk about it. Literally, this is my second day in Detroit and yesterday I was on the phone all day, and now this is my first press conference. So I promise you, we’re going to get to it. But I feel like it’s just too premature right now."