Matt Manning's head stuck out in a crowd of fourth- and fifth-graders in the gymnasium at Detroit Edison Public School Academy, a bit like his stature in the Tigers' clubhouse: Manning, who turns 25 later this month, is suddenly one of the longest-tenured members of the organization.

"Besides Miggy, (Spencer) Turnbull and (Tyler) Alexander, I’ve been here the longest. So yeah, I do take ownership," Manning said. "It’s the only team I’ve played for, it’s the only team I want to play for and I take that stuff personally."

By big-league standards, Manning is still green. He laughed at the idea of feeling old. He's closer in age to most of the kids he was high-fiving around the bases Friday morning in Detroit than he is to Miguel Cabrera, who turns 40 in April. Now that's old. If not for his lanky 6'6 frame, Manning might have been one of the students sitting on the floor with Paws and shrieking as No. 25 was introduced alongside Eric Haase and Matthew Boyd as the Tigers made their winter rounds in Detroit. 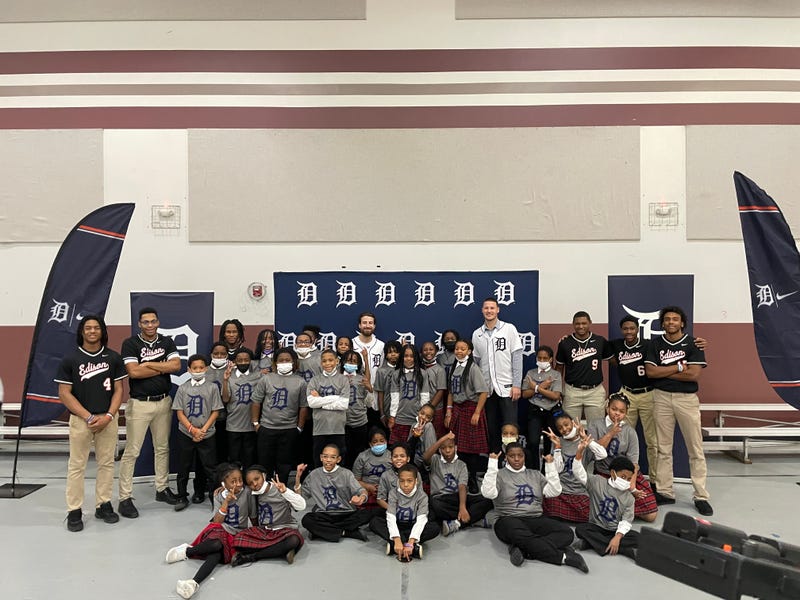 He might have been whacking a ball off the tee and running through every stop sign from his teachers, or rushing Boyd and Haase for their autographs, or losing his mind with the rest of his classmates when surprised with tickets to a Tigers game this season. He might have been talking about it when he got home from school. Manning was -- is -- that kid, too. He still shakes his head at facing Shohei Ohtani in his second big-league at-bat -- he walked the would-be MVP -- and Yadier Molina in his second big-league start.

"Getting to the big leagues when I was 22 was just like, shock. It’s like, you accomplished your dreams and you’re pitching to players that you grew up watching, so it’s really cool," Manning said. "But last year, made some good starts, injury bug hit me a little bit, now it’s just putting it all together."

Manning's big-league career began in 2021. It's about to begin in earnest. With a healthy right shoulder and a couple seasons under his belt, this is his year to show out in The Show. The Tigers need him. The Big Three is But One, Casey Mize and Tarik Skubal shelved by injuries. This is Manning's moment to make good on the hype.

He made a statement at the end of last season. After missing three and a half months with a shoulder injury, Manning pitched to a 3.60 ERA over his final 10 starts, 2.78 in September. That included four of the best outings of his career. He was scratched minutes before his final start due to arm fatigue, but he was cleared by doctors for a normal offseason and said he's "feeling strong, feeling good" ahead of spring training.

During his late-season surge, Manning sharpened his slider, "brushed up my curveball," which has always been a hammer, and played with some new changeup grips. These are tools he will carry into 2023. Most notably, he said he learned how to pitch with "full 100 percent effort and not feel like I’m kind of out of control in my delivery."

"As a young pitcher at this level," said A.J. Hinch, "he’s going to have a ton of confidence based on the positive outings that he had last season."

That's the former catcher who watches Manning from the dugout. Here's the current one who watches him from behind the plate:

"From my perspective, it’s great to see that growth, not just as a baseball player but as a human being. You start believing in yourself, like, ‘OK, these are the best guys, there’s no higher level and I can show that I’m performing here.'"

When asked about Manning, Hinch likes to say, "His best is good enough." For Manning, the next step is making his best stuff dominant, so that his decent stuff is good enough. Haase saw him make strides here last season, learning how to adjust and compete when his repertoire was limited. That's big-league growth, even more than wiping out a lineup when everything's working.

Manning's offseason growth has been more ... scientific. He smiled and said the Tigers "gotta have the only professor" in the big leagues. That would be new assistant pitching coach Robin Lund, a former kinesiology professor at Northern Iowa. Lund, who came to the Tigers after an impressive stint as the pitching coach at Iowa, is an expert in biomechanics and anatomy and how to harness both to enhance athletic performance. In other words, how to get the most out of your body.

When Lund breaks down a pitcher, Manning said he “looks at you like a stick figure.” That is, he doesn’t care who you are, where you were drafted or “what kind of hype you’ve got around you.” He’s going to identify your deficiencies to eliminate them. Thanks to Lund, Manning has learned that he’s “more of a supinator than a pronator” in the arm/hand and that he was previously "trying to turn over" his changeup to his own detriment.

More broadly, Lund and head Tigers pitching coach Chris Fetter have begun to refine Manning’s mechanics to make better use of his base. He’s always had a smooth over-the-top delivery. Now he said he’s focused on leading with the right parts of his body “instead of just jumping at the plate” and putting undue strain on his shoulder and elbow.

“The mindset is using more full body, more rotation and torque," Manning said. "That’s where Fet and Lund have been huge already in my development, just breaking it down from the ground up.”

Manning’s best asset might be his length. His extension — in essence, his hand’s proximity to home plate when he releases the ball — ranked in the 93rd percentile in the majors last season, per Baseball Savant. His pitches jump on hitters because, as Haase puts it, “He’s 6’6 and standing on top of you with an electric heater.”

“I think guys are genuinely surprised, when they get in the box, how uncomfortable they feel at times,” said Haase.

Manning’s seven-year stint with the Tigers has given him a unique view of the organization. He arrived as a first-round pick when they were stuck in the analytical dark ages. And he's reached Detroit as they've started to catch up, aided by the arrival of Hinch and more recently Scott Harris. Fetter has led the way on the pitching side. These days, Manning feels like his organization is giving him an edge.

“So I’m really proud to be in this organization and taking the next step forward.”

So this is Manning’s year. This is his moment. Prized prospects eventually have to become players. We’ll see what kind of protective measures the Tigers put on his arm, but either way, Manning plans to “take the ball and pitch until they put the brakes on me.” His “No. 1 goal,” he said, is to make 30 starts, the equivalent of his first two seasons combined.

His overarching goal remains the same: “Win a World Series for the Tigers.”