Aaron Judge was ready to go for his arbitration hearing Friday afternoon, but it never started.

Judge was “all dressed up” and ready on Zoom from the MLBPA offices in New York City, semi-aware that his representation and the Yankees were hammering out final details of what ended up being a one-year, $19 million deal with $250K bonuses for winning the AL MVP or World Series MVP.

And so, instead of wondering what an arbitrator would think of his case, Judge found out just before 1 p.m. that he had a deal.

“We were logged in and ready to go, all dressed up. I was just happy to settle,” said Judge. ““I knew it would work out one way or the other. I really wasn’t too concerned about what it was going to be. I was happy we were able to agree on a number and settle this thing and not have to go into court there.”

The main relief for Judge, beyond the settlement, was being able to play with a clear mind.

“If I would have went into that room than I probably would have missed the game tonight. That really didn’t sit too well with me,” he said. “I think I valued playing this game tonight with my teammates more than trying to battle it out during that hearing.” 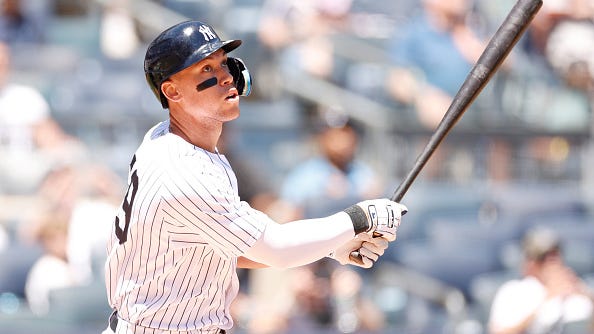 MLB insider predicts Aaron Judge won't be on Yankees in 2023

Of course, one has to have a laugh that Judge, in the middle of a possible MVP season, went 0-for-4 with a strikeout in Friday night’s 3-1 loss to Houston, but call it an off night, and back to work on Saturday.

“Definitely [a relief] to get back to focusing on baseball games and trying to bring a championship back here to New York,” Judge said. “Glad we were able to get through that process. Took a little longer than expected but thankfully we’re past it. Time to focus on winning some games.”

He is the engine of this offense that has led the Yankees to MLB’s best record by far, but don’t start talking long-term just yet. Judge reiterated that he won’t discuss a new long-term deal until after the season when he officially becomes a free agent.

For now, he’s just happy to know this one’s over.

“We got this one done and I’m just happy about that,” he said.