A week away from Ohio State, Michigan won't get caught looking past Illinois. Jim Harbaugh has been preparing his team for the Buckeyes all season, and this week is no different.

The team they're playing Saturday is in a traffic jam atop the Big Ten West, with a chance to make a statement against No. 3 Michigan. The Illini were No. 16 in the College Football Playoff rankings just two weeks ago, but losses to Michigan State and Purdue have dropped them back into the pack. Still, this is a worthy foe that Harbaugh said has "dominated the lines of scrimmage" in year two under Bret Bielema. Which has been Michigan's MO all season.

"Really well-coached, physical football team, so that’s the challenge. It’s a team that has had a great year. They’re in the hunt, one of the favorites or leaders to win that side of the conference, so it’s a big championship game for them and for us," Harbaugh said. "It’s a big football game."

The biggest one for Michigan, of course, is next week in Columbus. There was a feeling that Harbaugh failed to put enough emphasis on the Ohio State game during the first several years of his tenure, which led to loss after loss to the Buckeyes.

That changed last year when he added a number of former Michigan players to his coaching staff and a new sign was hung inside Schembechler Hall that asked, 'What are you doing today to beat Ohio State?' In the first practice that spring, he dubbed a pads-popping seven-on-seven drill the 'Beat Ohio drill' that the Wolverines ran every week throughout the season and eventually ran right through the Buckeyes for their first win in The Game in 10 years.

Now they're eyeing two straight for the first time this century. 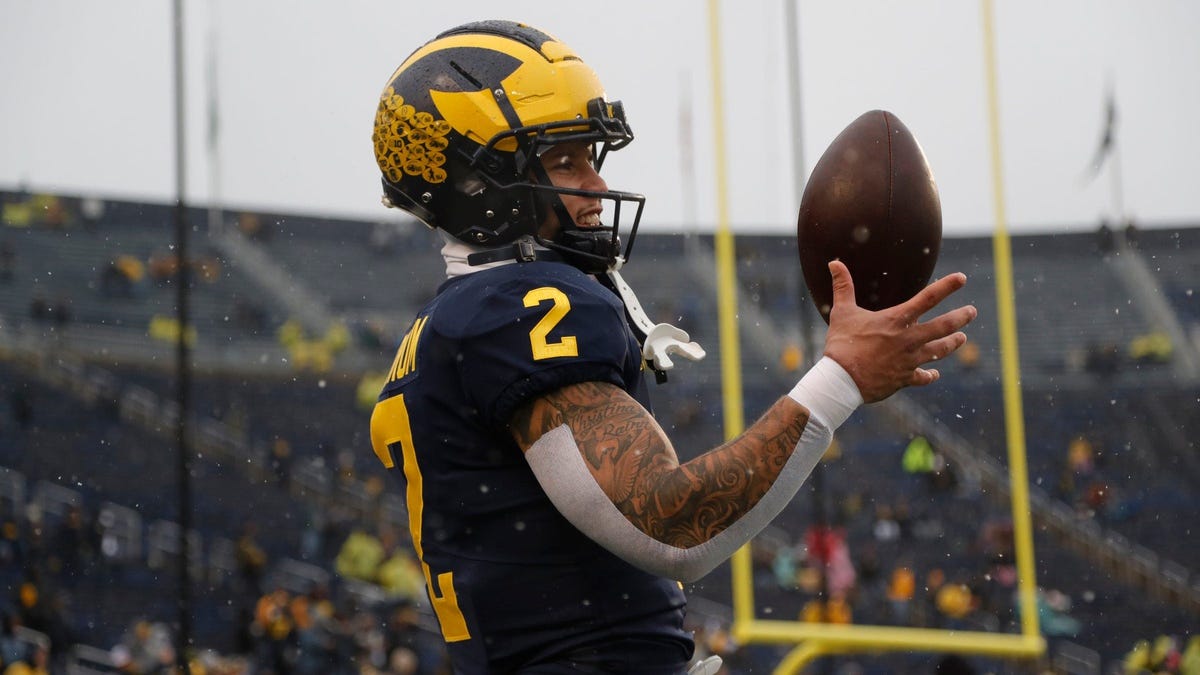 Last week in this space, Harbaugh was questioned about Michigan's red zone issues in a 52-17 rout of Rutgers. This week, he was questioned about J.J. McCarthy completing just eight passes in a 34-3 romp of Nebraska that sent the Wolverines to their first 10-0 start since 2006. These are 'problems' most programs would kill for.

"What would life be like if I didn’t get to come in here on Monday and hear from the scribes and pundits and so-called experts pointing out what could be better?" Harbaugh laughed. "It makes life enjoyable. I am so happy with the offense I can’t even say something to criticize the offense. So happy with J.J. McCarthy, receivers, another game where we throw two touchdown passes and hitting some big chunk plays."

Indeed, McCarthy completed a few big throws whether Michigan needed them or not, including a 25-yarder to Ronnie Bell on the Wolverines' opening where Bell was "naked," said Harbaugh, and a touchdown to a wide-open Bell in the second quarter. Along the way, Michigan's running backs combined for 6.5 yards per carry, led by Heisman candidate Blake Corum.

Hard to argue with the No. 5 scoring offense and the No. 4 rushing offense in the country.