Jim Harbaugh didn't hide his feelings after Saturday's long-awaited win over Ohio State. Asked how it felt in comparison to any other win during his seven-year tenure at Michigan, Harbaugh smiled wide and said, "It feels like the best one. It sure does."

"You guys should’ve seen him in the locker room after the game," said fifth-year O-lineman Andrew Stueber. "I’ve never seen him more happy or excited. Not just for himself, but his excitement toward the players. He’s gone through some tough times, faced a lot of adversity since he’s been coach here. To see him finally beat Ohio State, I couldn’t be happier for him."

Harbaugh heard the criticism in recent years, even if he did his best to ignore it. And it was deserved. The Wolverines had been on a downward trend since 2016. They entered this season unranked for the first time under Harbaugh since the year he arrived. They had lost their last two games against Ohio State by a combined 52 points. After Harbaugh got into a spat with Ryan Day on a teleconference with Big Ten coaches prior to last season, Day reportedly told his team, "We're going to hang 100 on them."

Harbaugh seemed to have that comment in mind when he was asked following Saturday's win if the chatter and the beatdowns from the Buckeyes pushed the Wolverines to punch back.

"It did," he said. "The things you’re thinking of are probably the same things I’m thinking off. Just move on with humble hearts and take the high road. But there’s definitely stuff that people said that spurred us on even more, sure. Sometimes people that are standing on third base think they hit a triple -- but they didn’t." 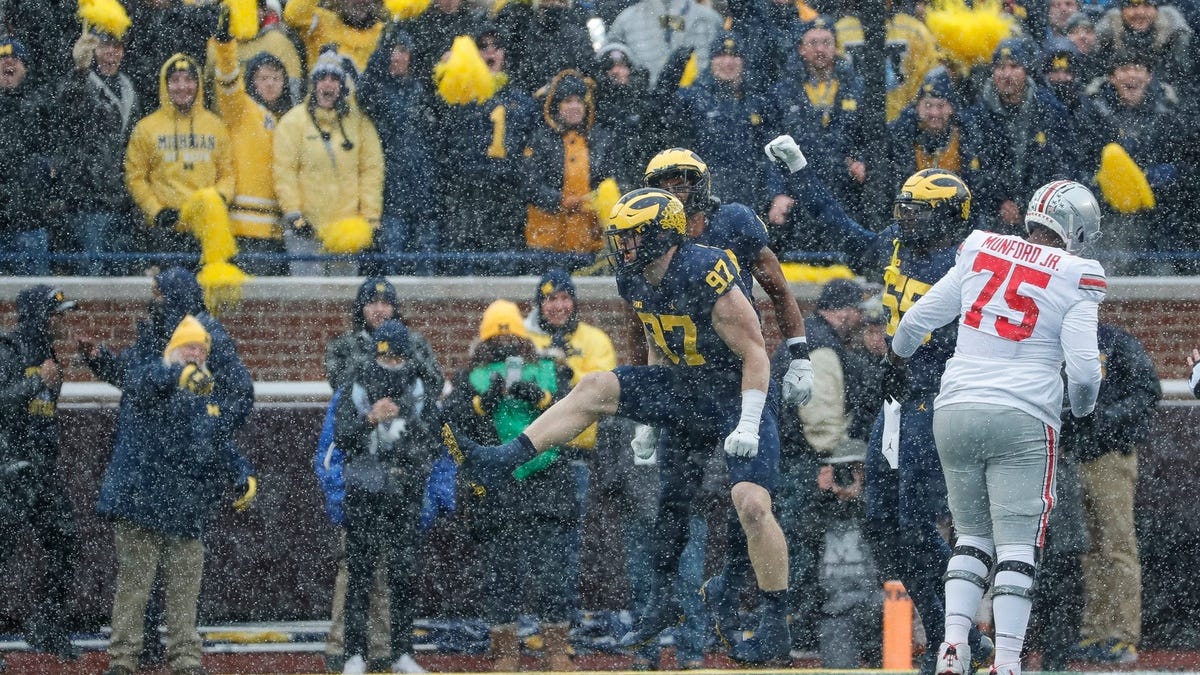 Catharsis in Ann Arbor, for a program and fanbase that needed it

You could argue that Day was born on third at Ohio State, not that he didn't work to get there. He took over for Urban Meyer in 2019 on the heels of a 13-1 season, a Rose Bowl victory and the Buckeyes' fifth straight top-10 finish. They were 55-4 in the Big Ten over the prior seven seasons. They were a well-oiled recruiting machine. Day has kept the program humming.

Harbaugh, by contrast, took over for Brady Hoke in 2015 on the heels of a 5-7 season. The Wolverines hadn't finished in the top 10 since 2006. They were 24-30 in the Big Ten over the prior seven seasons. They were a former slugger that kept striking out. Harbaugh has them back on third, with home in sight. Michigan will play Iowa next Saturday in the Big Ten championship game, with the playoffs beckoning. The Buckeyes will be watching from home.

"These guys have been disrespecting us, stepping on our jerseys, talking about hanging 100 on us," said Michigan star DE Aidan Hutchinson. "Doing all the rah-rah, all the talk. But we were about it today."

"We knew that we could beat them and now we know what it takes," said QB Cade McNamara. "Now we just have to do that every single year. They’re human too, and we proved that today."

Day called the loss "a failure" for Ohio State. On top of his best win at Michigan, Harbaugh said "it feels like the beginning." His beginning was certainly harder than Day's, which made Saturday's ending that much more rewarding.

"Maybe next week’s will be the best," Harbaugh said. "That’s why it feels like the beginning. We’ll move on with humble hearts. Greatness doesn’t fear consequences. Fearless but not careless. Onward. That’s how it feels."