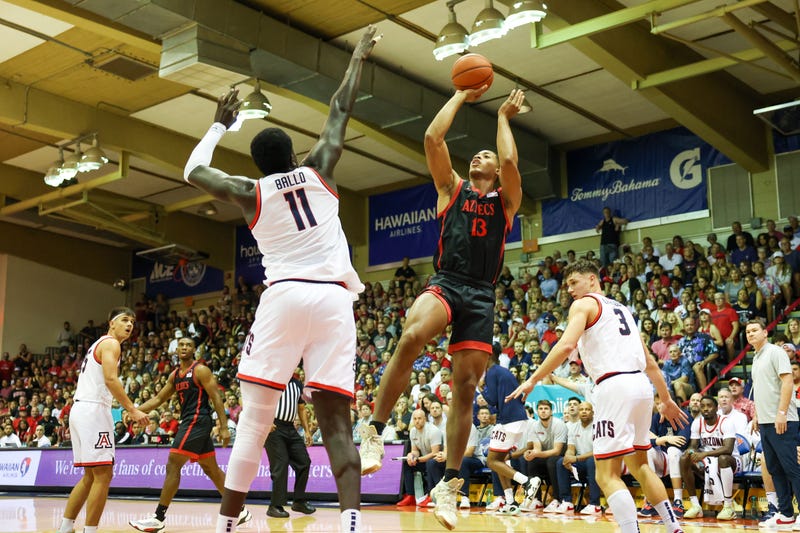 In a matchup of two teams ranked in the AP Top-25, the #17 San Diego State Aztecs fell to the #14 Arizona Wildcats 87-70 in the semifinals of the Maui Jim Maui Invitational. The Aztecs were handed their first loss of non-conference play, dropping to 4-1.

The Aztecs trailed by as many as 16 points in the first half, but would rally to cut the deficit to 37-33 heading into halftime. San Diego State briefly took a two-point lead in the opening minutes of the second half at 42-40, but the Wildcats then surged ahead on a three-pointer from Pelle Larsson. Arizona never trailed again.

San Diego State was led by guard Darrion Trammell, who scored a team-high 21 points. Micah Parrish collected 10 points and was the only other Aztec to score in double figures.

The Aztecs shot 38% from the floor and went just 3-for-19 from three-point range.

Arizona had five players score in double figures, including 21-point performances from Courtney Ramey and Kerr Kriisa. The pair combined to go 8-for-15 from beyond the arc, while Ramey went 5-for-5 on three-point attempts. The Wildcats shot 59% as a group, and were +11 in rebounding margin.

San Diego State wraps up their trip to Maui with a matchup against #9 Arkansas for third place in the tournament. Opening tip on Wednesday is at 7 p.m. PT.