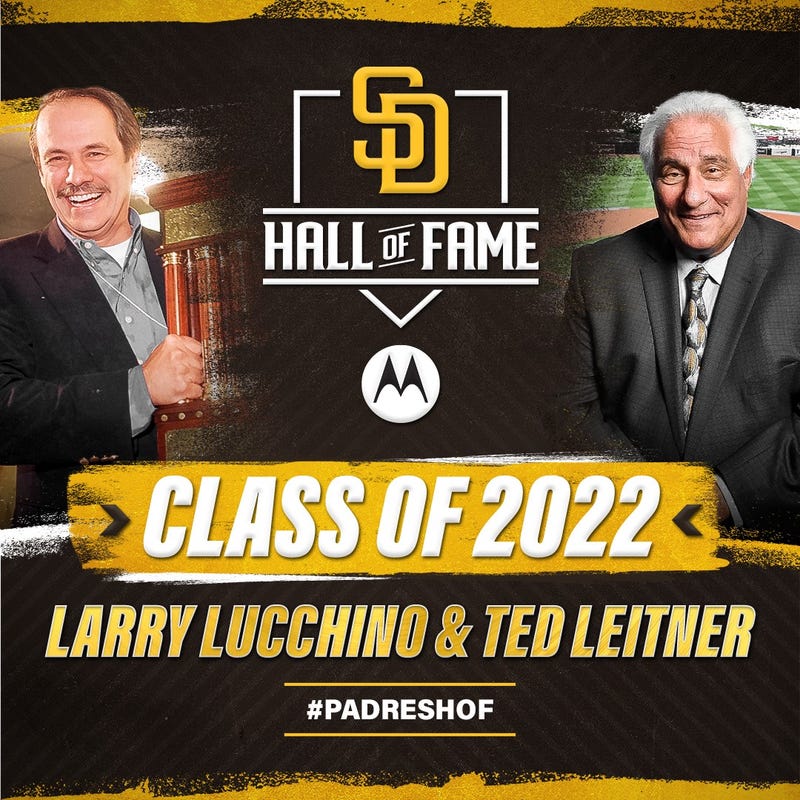 The Padres have announced that former Padres broadcaster Ted Leitner and former team President and CEO Larry Lucchino will comprise the 2022 Padres Hall of Fame induction class as the 16th and 17th members. The two will be honored during an on-field ceremony before the Padres-Giants game on Thursday July 7th.

From the Padres' announcement:

Lucchino served as the club’s president and CEO from 1995 to 2001. He played an integral role in building the Padres teams that went on to win two National League West titles (1996, 1998) and the 1998 National League pennant, first by hiring fellow Padres Hall of Famer Kevin Towers as General Manager, and then by working closely with Towers and Manager Bruce Bochy to construct championship-caliber teams. The approval and design of Petco Park was Lucchino’s lasting legacy, from lobbying city officials and working to win the 1998 vote that approved the ballpark to leading the design of the ballpark.

“I am deeply honored by my selection into the San Diego Padres Hall of Fame,” said Lucchino. “I very much miss the City of San Diego, and I love Petco Park. It is a handsome point of civic pride in a prospering, revitalized ‘Downtown Neighborhood by the Bay.’ I’m proud of what we accomplished on the field and in the community, and I am proud that the Padres can continue to supply winning, affordable baseball in a distinctive, warm, hospitable, and comfortable environment. As we hoped, our beloved San Diego is emerging as one of America’s best baseball markets.”

Leitner was the primary play-by-play radio voice of “My Padres” for 41 years from 1980 through the 2020 season. He has been a broadcaster for 43 years in San Diego as he continues to be the voice of the San Diego State University Aztec football and basketball programs. His career includes 25 years (1978-2002) as a sports anchor for KFMB-TV, the local CBS affiliate, and play-by-play roles for the San Diego Chargers and Philadelphia Eagles of the National Football League, the San Diego Clippers of the National Basketball Association, the University of Oklahoma and the University of Connecticut. Beyond broadcasting, Leitner has served as the Master of Ceremonies for many Padres events, including Padres Hall of Fame ceremonies, the memorials of Jerry Coleman and Tony Gwynn, Padres Opening Day ceremonies, and Jerry Coleman Day in 2012, which honored Coleman’s 70 years in baseball.

“This is the greatest honor of my professional life,” said Leitner. “Broadcasting for My Padres for four decades was pure pleasure, but this is beyond my expectations. I have endless gratitude for Peter Seidler and all those who have made this a reality.”