The 49ers’ quarterback situation dragged out all summer long, and it’s paid off for them in a weird way.

They decided to keep Jimmy Garoppolo and it turns out he's going to be needed after 2021 3rd overall pick Trey Lance suffered a season-ending ankle injury on Sunday, giving the starting role back to Jimmy G. Garoppolo has been in San Francisco since 2017 and was prepared to take a backseat to the young Lance entering the season.

Garoppolo helped lead the 49ers to a blowout win over the Seahawks and San Francisco saw their Super Bowl odds improve despite the injury to Lance.

Evan Giddings and Marc Grandi of Audacy’s “The 415ers” podcast discussed the 49ers’ chances to make the playoffs and win the Super Bowl after the change at quarterback.

Podcast Episode
The 415ers
Are the 49ers Now a Lock for the Playoffs?
Listen Now
Now Playing
Now Playing

“As far as the 49ers’ chances to make the postseason, in a weird way I didn’t feel necessarily confident with Trey Lance as the quarterback – of course having seen one and not even a quarter games in for the 49ers,” Giddings said (5:35 in player above). “I didn’t feel supremely confident that they would make the playoffs. But now with Jimmy Garoppolo back under center, I almost feel like you can pencil in 10 wins and put them in the first round.”

Garoppolo has a career record of 31-14 with the 49ers, and even if that record is inflated by a great defense, he’s shown that he is capable of winning games. He went 9-6 in 15 regular-season starts last season and went 2-1 in the playoffs as well.

“This team is probably closer to the playoffs than if Trey Lance was the starter for the whole season or even if he wasn’t hurt at this point and the rest of the season was, at worst, a question for him,” Grandi agreed. “I’m not so sure about maybe what that means for the postseason because I think there’s a very realistic chance that if Trey Lance was playing a whole season – he played 17 games in a regular season – I think it’s very likely you would’ve seen some pretty steady growth from him in his first season, his first full season as a player in the NFL. And then who knows what that quarterback might look like when the postseason comes around. There’s a chance that he just picks things up and he’s one of the top 10 quarterbacks in the league once the postseason rolls around. I’m not saying that’s what I was expecting, but it’s a possibility.”

While Lance gave the 49ers a potentially dynamic quarterback, Garoppolo offers a safer option. That puts San Francisco in a weird position.

“With Jimmy, you have a proven guy. You know his limitations, you kind of know what to expect, which is why I agree the postseason is likely because if Jimmy Garoppolo stays healthy, the past tells you that this is probably a team that’s going to win more than half of their games and in the NFC right now, that likely suggests you’re going to make the postseason,” Grandi continued. “Again, I’m not sure what that means for the playoffs and if they can win road playoff games like they did last year, but I would agree that with this injury, as strange as it is to say, with the backup quarterback now playing, this team is more likely to make the postseason and I think the team probably agrees.”

The 49ers struggled in Week 1 at a rain-soaked Soldier Field. Lance ran the ball 13 times for 54 yards, which is also the same number of completions he had on 28 passes. He threw one interception and was sacked twice.

Lance led the 49ers to a field goal on their opening drive in Week 2 before suffering that ankle injury on the second drive. Garoppolo came into the game and made his presence felt with 154 yards through the air, including one touchdown pass on a 13-for-21 day.

“(Garoppolo) masks so many of the early-season immediate deficiencies in the offense that we saw from Trey Lance, but of course the projection of where Trey Lance was going to be after Game 17 is why I think the playoffs, once you get there, are more of a question mark than they were before,” Giddings said. “So that’s why I absolutely believe … they are closer to making the playoffs but they are further from achieving the ultimate goal which is to win a Super Bowl.”

Garoppolo and the 49ers reached the Super Bowl in the 2019 season, ultimately losing 31-20 to the Chiefs, who scored 21 unanswered points in the fourth quarter. So, while the veteran QB gives the 49ers a safer floor, he may also lower their ceiling.

“The ceiling of Garoppolo, I think most people would tell you is he can get you to the playoffs, he can obviously win you games, but when it comes down to a fourth quarter where you need a score. where you need to get yards, you need to get the win, he, in all likelihood, is not going to be that guy,” Giddings said. “I felt like the variable of Trey Lance is the floor could be six wins, maybe, this year, it also could’ve been 12, but I feel very safe saying the San Francisco 49ers now will be in the playoff mix because of how weak the NFC is as well as I know what Jimmy Garoppolo can do. I know his limitations but I also know how far they can take him.” 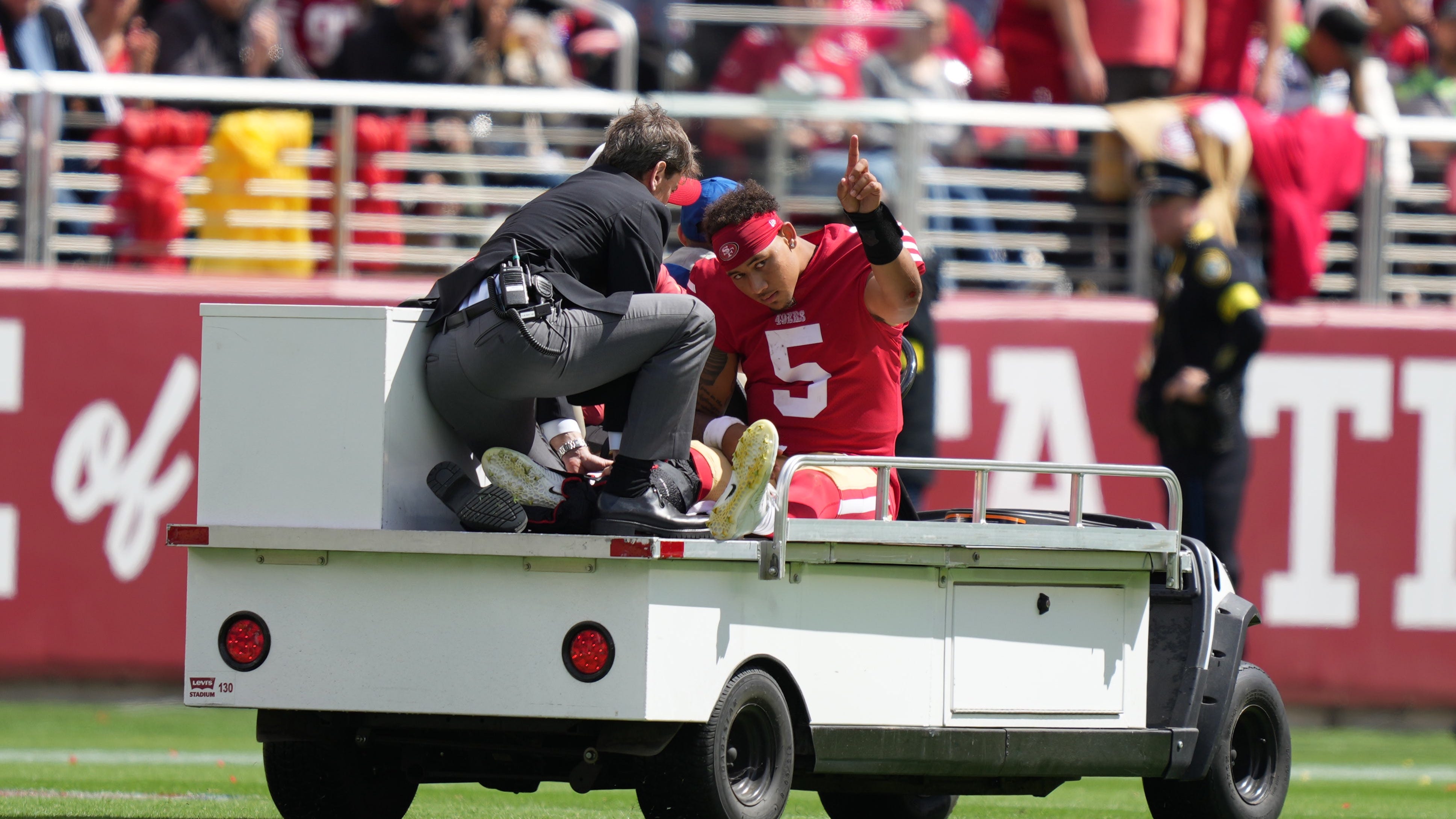