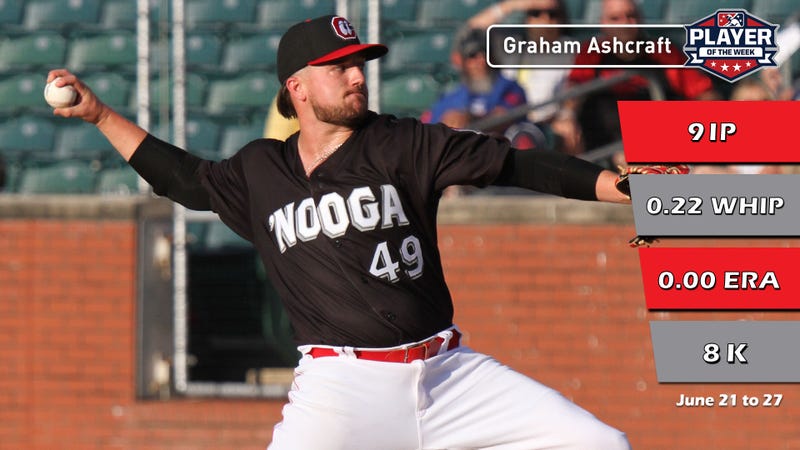 CHATTANOOGA, Tenn. – Minor League Baseball has announced that Chattanooga Lookouts right-hander Graham Ashcraft has been named the Double-A South Player of the Week (6/21 – 6/27).

In his team debut, Ashcraft made quite the first impression.  The 2019 draft pick began his Double-A career by throwing six perfect innings against the Rocket City Trash Pandas before surrendering an infield hit in the seventh inning.  Ashcraft finished the game only allowing two hits and completed his first professional complete game shutout.

Prior to joining the Lookouts, Ashcraft was 4-1 with a 2.33 ERA and 55 strikeouts with the Dayton Dragons and was named a High-A Central Player of the Week (June 6).  The righty has now gone 32.1 straight innings without allowing an earned run.

Ashcraft is the third Lookouts player to take home Double-A South Player of the Week honors, joining fellow starters Nick Lodolo and Hunter Greene. He will make his next start this Tuesday when the Lookouts travel to Birmingham to face the Tennessee Smokies.

Single game tickets for the team’s next homestand and the rest of the season are on-sale now at Lookouts.com.
The Lookouts Team Store is open for business Monday to Friday 9am to 5pm. Fans are encouraged to check out the lineup of gear and face masks available.
Lookouts gift cards are also available through Lookouts.com.

The Chattanooga Lookouts, a founding member of the Southern League in 1885, are the 2015 & 2017 Southern League Champions and the Double-A affiliate of the Cincinnati Reds. The Lookouts play their home games at AT&T Field, located on Hawk Hill in downtown Chattanooga. For more information, keep up with the Lookouts year-round at www.lookouts.com, or by following us on Facebook (www.facebook.com/Chattanooga Lookouts), Twitter (@ChattLookouts) and Instagram (@ChattLookouts). Lookouts Baseball is presented by FirstBank.