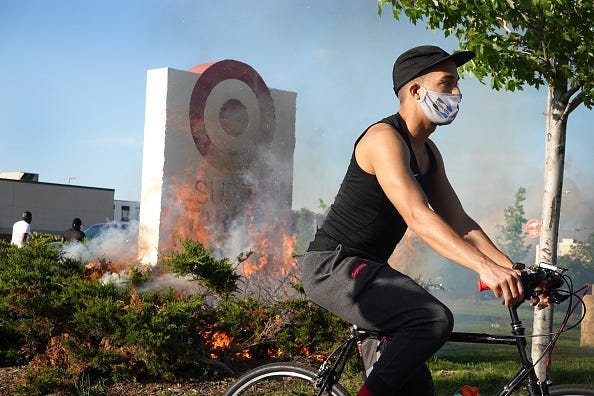 (WCCO) As Minneapolis continues to reel from the death of George Floyd and the destruction that followed, one corporate citizen is among those stepping up.

Minneapolis-based Target announced that will pay employees impacted by store closings due to the civil disruption across the region for up to 14 days of the hours they were scheduled to work. Some will also be able to work at other nearby Target locations that remain open.

This comes as the company closes roughly a dozen stores to prevent further damage from protests sparked across the region.  See the full list of closures HERE.

After disruptions spread the country, the current list includes not only the Twin Cities, but also locations in California, Georgia, and Pennsylvania.

“We are making the decision to reduce hours or temporarily close stores for the safety of team members and guests,” a Target spokesperson wrote in an email to the Pioneer Press. “We are not providing a count on the number of store impacted by reduced hours or temporary closures as the situation remains incredibly dynamic.”

Additionally, CEO Brian Cornell announced several measures to support, including: providing immediate first aid, food, and basic essentials to the community through partnerships with local nonprofits; committing to rebuilding and reopening the storefront Lake Street as well as any other storefronts impacted; and engaging with community leaders to support local families.

“The murder of George Floyd has unleashed the pent-up pain of years, as have the killings of Ahmaud Arbery and Breonna Taylor,” Cornell wrote. “We say their names and hold a too-long list of others in our hearts. As a Target team, we’ve huddled, we’ve consoled, we’ve witnessed horrific scenes similar to what’s playing out now and wept that not enough is changing. And as a team we’ve vowed to face pain with purpose.”