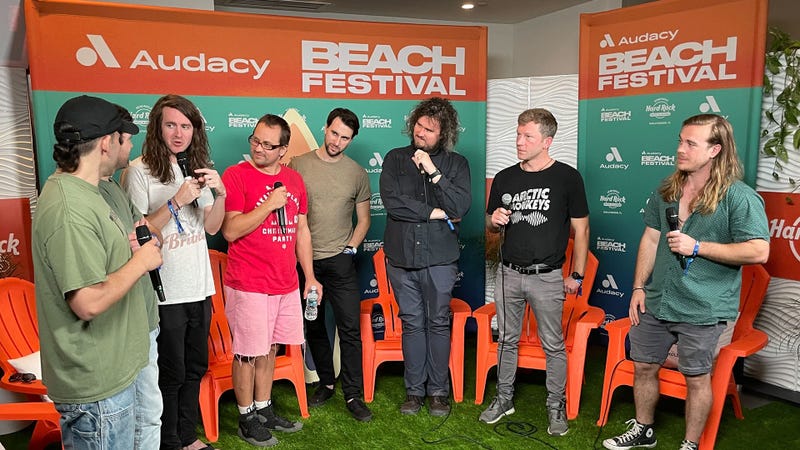 Florida Emo rockers Mayday Parade and '90s favorites Wheatus both joined us for performances at this past weekend's Audacy Beach Festival in Ft. Lauderdale, FL -- and during their visit the bands happened to cross paths with each other in the Hard Rock Artist Lounge. So, we just had to put 'em to work...

The first question was from Wheatus to Mayday Parade's Jeremy "Cabbage" Lenzo who was tasked to explain what the most important thing is that he's learned on the road since he last saw Wheatus live. "Don't take all the money at the end of the night for yourself," Cabbage says eliciting laughs in the room. "Make sure you split it evenly amongst the bands... never leave your bass at the venue..."

"In all seriousness" the bands explain, "we did a tough tour together, 16 years ago." Cabbage adds, "it was our first tour in this band, in Mayday Parade, our first tour ever." Obviously, any kind of misunderstanding that happened all those years back have been washed away like water under the bridge when you hear the members of each band talk amongst themselves.

Wheatus frontman Brendan Brown also reminisced about Mayday Parade guitarist Alex Garcia's fashion sense, remembering that back when they toured together he had just one pair of jeans that he had worn for a good two years. Cabbage adds, "That was the first thing you said when you walked in: 'Do you still have those jeans?!'" "They were probably my girlfriend's, too," Alex laughs. "Oh my God, that's beautiful," Brown says with a smile. "It was a simpler, dirtier time."

"We learned things from these guys about the hustle that we couldn't have imagined existed," he continues. "The way you guys approached touring was so make or break and it's still the baseline of inspiration for not letting anything get to you, and just continuing to the next show with the best thing you can do."

"We're so tired," says Cabbage. "We were so green on that tour and we learned so much from you guys, and you guys were so welcoming and sweet to us... it was incredible."

Listen to the full discussion above and be sure to follow along for more updates from the sun and sand of Audacy Beach Festival 2022.