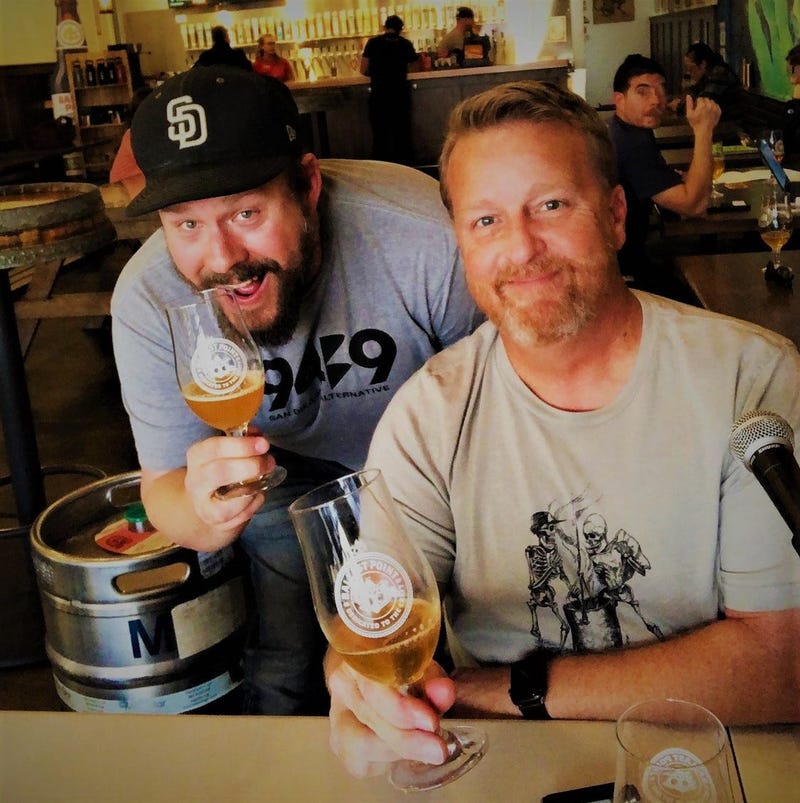 That’s right, kids! From the very brewery that got the whole world hooked on IPA’s comes an utterly luxurious IPA that is a treasure trove of hoppy goodness. Introducing Ballast Point’s Grinner IPA, released for the first time this week. “If I could, I would drink this every day,” says DJ Jeremy, “it’s simply one of the best IPA’s I’ve tried this year.” That’s no idle boast coming from the host of Rock & Roll Happy Hour—which, by the way, will be broadcasting live on location from Ballast Point for the next couple of weeks. Yes, that’s just how much we love this beer—and our good friend at Ballast Point Colby Chandler, who always piles our plates high with culinary delights from the depths that are perfectly paired with a Ballast Point pint.

With a nod to the wheeling and dealing that has made high finance headlines over the last decade, Ballast Point’s own front page acknowledges that there have been some ups and downs over the years. Grinner IPA, which has been brewed in celebration of a “new era” at the brewery, is proof positive that the brew team at Ballast Point truly are out to make the beers that they want to drink, plain and simple.

And what, pray tell, just what is a “grinner?” None other than a spectacular coral reef-dwelling fishie who, while changing colors throughout its life, always maintains a toothy grin. You’ll be wearing one too after your first sip! Grinner IPA features a lupulin largesse that most brewers in their right mind would never even consider sinking into a single barrel of beer, says Ballast Point brewer Jesse, and is (drum roll, please) THE MOST HEAVILY HOPPED BEER in the brewery’s twenty-four year history!  A West Coast style IPA that balances lightly toasted, bready malt with tropical hop aromas of citrus and tropical fruit, a pint of Grinner deserves another. Bring it on, we say! Oh, and don’t forget the poke.

Grinner IPA is brewed as part of Ballast Point’s Brewers Series and is available exclusively on draft at Ballast Point brew pubs for a very limited time. Swim fast! 7.2% abv.