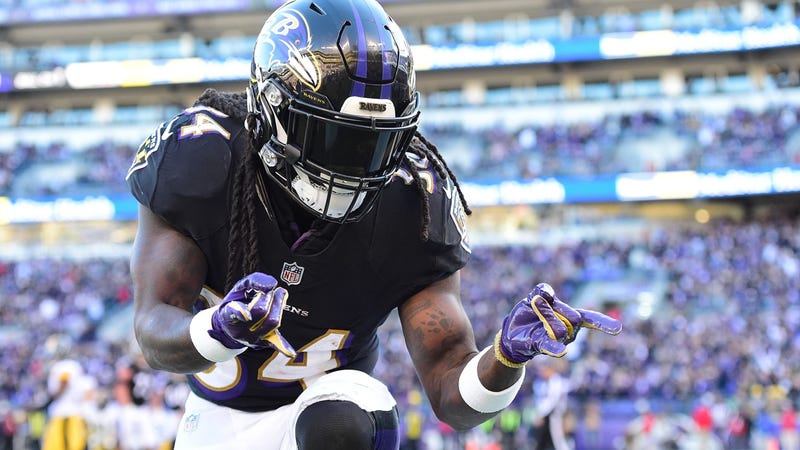 BALTIMORE (105.7 The Fan) -- The Baltimore Ravens released running back Alex Collins on Friday hours after his arrest in Owings Mills, Md., stemming from a reported early-morning car crash near the team's practice facility.

According to the Baltimore County Police Department, officers responding to the scene at around 6:48 a.m. found Collins' car crashed into a tree and Collins asleep at the wheel. Police say a subsequent search discovered a large jar of marijuana and a handgun under the floorboard.

Collins, 24, was charged with possession of marijuana in excess of 10 grams, intent to distribute marijuana and possession of a handgun in a vehicle. Collins was released on a $7,500 bail following a hearing just after midnight.

Collins’ attorney Andrew I. Alperstein said the gun was unloaded, according to the Baltimore Sun.

Collins took over Baltimore's starting running back role in 2017. After being cut by the Seattle Seahawks, Collins was added to the active roster, and rushed for 973 yards and six touchdowns. He battled a foot injury in 2018, and he compiled just 411 rushing yards -- though he scored seven touchdowns -- while losing his starting job to rookie Gus Edwards.

Collins was a restricted free agent prior to being waived. With his ineffectiveness in 2018 and the emergence of Edwards and Kenneth Dixon, it wasn't a guarantee that Collins would be back with the team. Baltimore may look to drafting a running back or adding a free agent, possibly former Pittsburgh Steelers running back Le'Veon Bell.