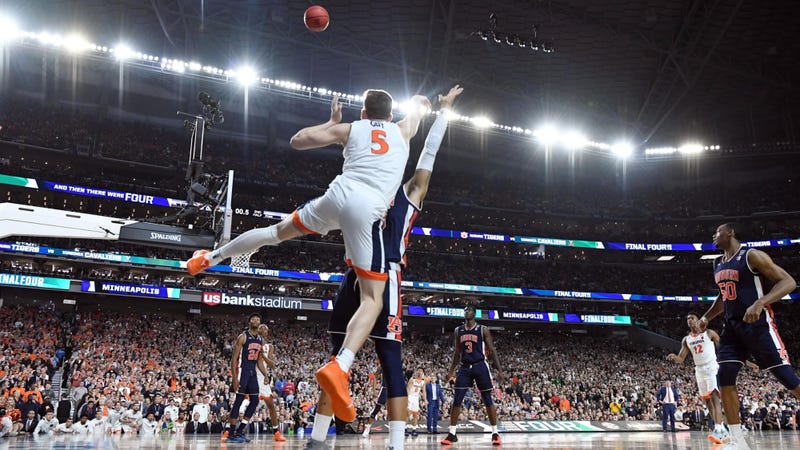 (670 The Score reporting from MINNEAPOLIS) -- Standing on the CBS set behind the west basket inside U.S. Bank Stadium, NBA great and basketball commentator Charles Barkley flung his arms into the air as Virginia guard Kyle Guy's shot hit the rim and gave Auburn a premature moment of celebration.

Barkley's arms quickly dropped to his side, suddenly stretched out and showing his confusion. The jubilance turned into disbelief for the former Auburn star once he realized what had happened. Guy was fouled, granted three free throws and hit them all, sending the Cavaliers to a 63-62 victory over his Tigers in the Final Four.

"I want to cry right now," Barkley said as he picked up the microphone for the postgame show.

All Auburn could do was accept the whistle and outcome. The foul by Anfernee McLemore was called due to contact with Guy after his fadeaway was released. The celebration had already begun for Auburn, and the PA announcer even declared the game over, a 62-60 win for the Tigers.

He head to the line with a chance to WIN THE GAME. pic.twitter.com/DuF7NEQd32

Guy realized immediately that he was heading to the free-throw line, tucking his eyes into his jersey and focusing on the shots. He avoided eye contact with teammates and stepped up in the clutch.

"You dream of those moments," Guy said.

For Auburn, it was all part of a nightmare.

South of Minneapolis, 1,181 miles away at Auburn's famed Toomer's Corner, the celebration had already begun. Then word spread of what Guy did.

Auburn coach Bruce Pearl had accepted it all by the time he emerged to the postgame press conference nearly an hour after the final horn sounded and the game was actually over. His voice was soft and his words were few, but even he could understand it all.

No. 5 seed Auburn proved to be a relentless team on their way to the Twin Cities, beating blue bloods Kansas, North Carolina and Kentucky in consecutive NCAA Tournament games to reach the Final Four.

But Auburn met its match in top-seeded Virginia, which made it this far with terrific guard play and a trademarked defensive intensity. The Cavaliers controlled the pace of the game, holding the Tigers to 38 percent shooting from the field and only four fastbreak points.

Auburn had gone on a 12-0 run after Virginia guard Ty Jerome picked up his fourth foul with 4:32 remaining, and the Tigers had the chance to seal their victory.

“As Ty Jerome brings the ball up the court, he accidentally bumps the ball off his back foot … he then re-possesses this ball with both hands. That ends his dribble.”@GeneSteratore explains a missed double-dribble violation on Ty Jerome near the end of the game. pic.twitter.com/763pV0sXyA

Then came the fadeaway by Guy, the stunning whistle and three clutch free throws.

"I'd like it to be remembered for a great game," Pearl said. "Let's not remember this game because of just how it ended.

"It was a great college basketball game."