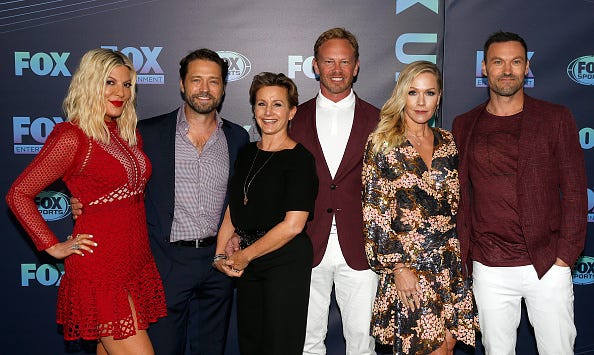 As the new “BH90210” prepares for its launch this summer, castmates are spending some quality time together before they hit the ground running.

Tori Spelling teamed up with castmates Jennie Garth and Gabrielle Carteris for dinner on Sunday. Spelling shared a photo to Instagram of the three enjoying a bottle of wine on a balcony, each sporting a different black bathing suit.

She continued to post about the outing, sharing another photo of the three, which includes a cameo from a pup perched on Carteris’s lap. In the caption, Spelling opens up on how much their friendship has meant to her.

“I never got the experience of going away to college after high school (well I went to pretend college on 90210) but now I get to have these beautiful ladies as my roomies for the summer!,” she writes.

The images are both tagged in Vancouver, British Columbia where the ladies are currently staying while they film the new “BH90210.”

The show will not be a reboot, but rather a six-episode series following the actors as they live dramatized versions of their own lives as if they were preparing to create a reboot.