DAYTON, Ohio (1010 WINS/AP) — The gunman who opened fire in a popular nightlife area of Dayton, Ohio, early Sunday morning, killing nine and injuring at least 27 -- the second U.S. mass shooting in less than 24 hours -- has been identified: Connor Stephen Betts, 24, of Bellbrook, Ohio.

Law enforcement sources told NBC News Sunday that the suspect's sister and her boyfriend were among the dead. The sources said they were found in a car and had both been shot.

Police in Bellbrook confirmed Sunday morning that they were assisting Dayton police and the FBI to execute a search warrant at the home where the suspect lived with his family. The home belongs to Stephen R. Betts, according to online property records, according to WHIO, which also reported that investigators arrived at the home at 6 a.m.

Dayton police patrolling the area responded in less than a minute to the shooting, which unfolded around 1 a.m. Sunday on the streets of the Oregon District, Dayton Mayor Nan Whaley said at a press conference. Betts was wearing body armor and carrying extra magazines.

Whaley said if the police had not responded so quickly, "hundreds of people in the Oregon District could be dead today."

The Oregon District is a historic neighborhood that Lt. Col. Matt Carper described as "a safe part of downtown," home to entertainment options, including bars, restaurants and theaters.

The gunman was shot to death by responding officers. Whaley said he was carrying a .223-caliber rifle and had additional high-capacity magazines with him. Police believe there was only one shooter, and have not yet identified the suspect or a motive. 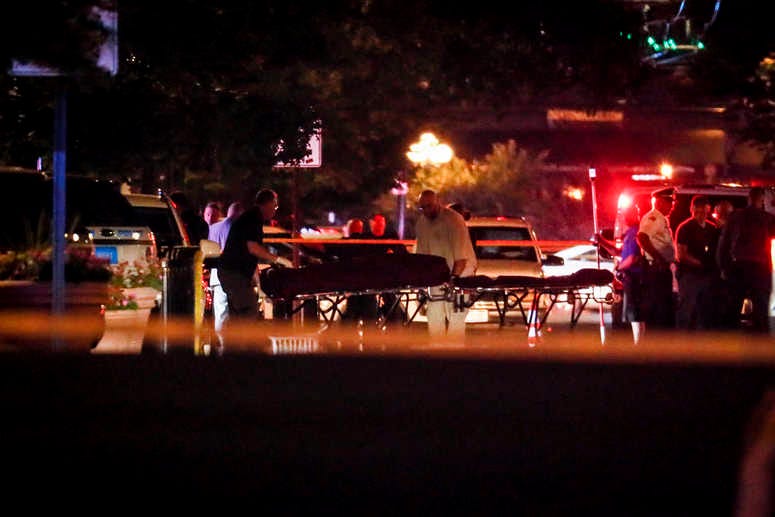 At least 26 others are being treated at area hospitals, though no details about their conditions have been released.

Miami Valley Hospital spokeswoman Terrea Little said the hospital had received 16 victims, but she couldn't confirm their conditions. Kettering Health Network spokeswoman Elizabeth Long said multiple victims from a shooting had been brought to system hospitals, but she didn't have details on how many.

Nikita Papillon, 23, was across the street at Newcom's Tavern when the shooting started. She said she saw a girl she had talked to earlier lying outside Ned Peppers Bar.

"She had told me she liked my outfit and thought I was cute, and I told her I liked her outfit and I thought she was cute," Papillon said. She herself had been to Ned Peppers the night before, describing it as the kind of place "where you don't have to worry about someone shooting up the place."

"People my age, we don't think something like this is going to happen," she said. "And when it happens, words can't describe it."

"Clearly the question has to be, why does Dayton have to be the 250th shooting in America?"

Dayton, OH Mayor Nan Whaley briefs the press in the wake of a mass shooting that saw 10 killed pic.twitter.com/SI5F7hv1Y4

Tianycia Leonard, 28, was in the back, smoking, at Newcom's. She heard "loud thumps" that she initially thought was people pounding on a dumpster.

"It was so noisy, but then you could tell it was gunshots and there was a lot of rounds," Leonard said.

President Donald Trump has been briefed on the shooting and praised law enforcement's speedy response in a tweet Sunday morning.

Gov. Mike DeWine issued his own statement before 7 a.m., announcing that he's ordered flags in Ohio remain at half-staff and offered assistance to Whaley.

"Fran and I are absolutely heartbroken over the horrible attack that occurred this morning in Dayton, the statement said. "We join those across Ohio and this country in offering our prayers to victims and their families."

The FBI is assisting with the investigation. A family assistance center was set up at the Dayton Convention Center.

President Trump ordered flags in the nation to be flown at half-staff from Sunday until sunset Thursday to show respect for the victims lost in both shootings.

"We condemn these hateful and cowardly acts. Through our grief, America stands united with the people of El Paso and Dayton. May God be with the victims of these two horrific crimes and bring aid and comfort to their families and friends," reads a statement from the White House press secretary.

Sunday's shooting in Dayton is the 22nd mass killing of 2019 in the U.S., according to the AP/USA Today/Northeastern University mass murder database that tracks homicides where four or more people killed — not including the offender. The 20 mass killings in the U.S. in 2019 that preceded this weekend claimed 96 lives.

The shooting in Dayton comes after the area was heavily damaged when tornadoes swept through western Ohio in late May, destroying or damaging hundreds of homes and businesses.

"Dayton has been through a lot already this year, and I continue to be amazed by the grit and resiliency of our community," Whaley said.