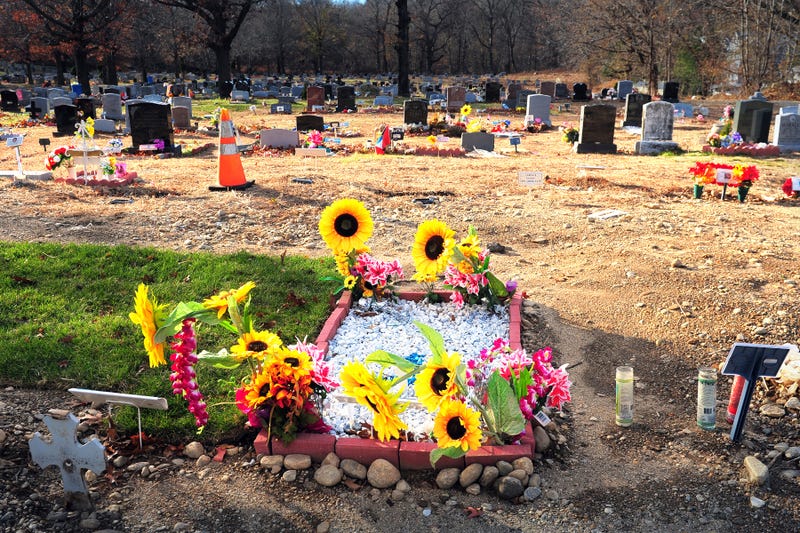 Photo credit FILE - This Nov. 29, 2018 file photo shows Park Cemetery in Bridgeport, Conn. Authorities say gravestones and human remains at the cemetery were moved to make way for the newly dead. A state judge ousted the cemetery caretaker last week because of the conditions. (Ned Gerard/Hearst Connecticut Media via AP, File)
By The Associated Press

Since the 1990s, Cheryl Jansen had noticed junk and tree limbs piling up at the once oasis-like Park Cemetery, just north of downtown Bridgeport, and wondered where the money families had paid for perpetual upkeep was going. What she learned after finally taking her case to a judge shocked the conscience.

Gravestones and remains moved without permission to make way for the newly dead. New graves simply stacked on top of old ones, separated by a new layer of dirt. Worst of all, human bones, casket pieces and old headstones tossed in the woods like trash.

Now Jansen and other families are waiting to see what happens to a caretaker who apparently long ago lost the will to do her job. They also are trying to establish whether the remains of their loved ones and other, older graves are where they're supposed to be, and — in the absence of any government overseers — are stuck with the responsibility of making sure this never happens again.

"It's just horrible," said Jansen, whose great-grandparents and other relatives are buried at Park Cemetery along with veterans from several wars including the Civil War. "It's absolutely just unbelievable that people did this and they've been doing this for a while. Just a total nightmare. You never think you have to worry about your dead relatives ... but I guess these days you do."

Jean Mattox said her mother's gravestone had been moved a short distance away and placed above another person's remains. Her son discovered the problem a few months ago, when things looked out of place and he compared the scene to a photo taken when the grave was in the correct spot.

The shocking discovery in Connecticut's largest city is the latest to highlight problems at cemeteries nationwide that have included the reselling of plots, vaults broken to make room for more remains and generally lax government oversight.

In a notorious case four years ago in Tennessee, state officials closed a cemetery near Memphis where the owner — who received 10 years of probation in a criminal plea deal — was accused of misplacing hundreds of bodies and burying multiple cadavers in the same grave.

In Connecticut, the state public health department must approve new cemeteries, but no state agency is specifically charged with cemetery oversight. That appears to have led at least in part to the failings at the 57-acre Park Cemetery.

The cemetery was established in 1878, and a cemetery association board oversaw its operation and maintenance for decades. Jansen, whose relatives' graves were not disturbed, said it appears the board hasn't existed since the early 1980s and that oversight was eventually left to caretaker Dale LaPrade and her husband, Daniel.

People with relatives buried there had complained over the years to police and other local officials about conditions, but nothing ever was done, Jansen said. Finally, she went to probate court, seeking financial records to see what happened to the money families had paid for perpetual upkeep.

Probate Judge Paul Ganim asked city police to investigate — and that, she said, is when officials started taking the situation seriously.

Police searched the cemetery and its offices in September. Detectives testified in court that they found old gravestones in the woods, broken stones lying around and bones, later identified as human, lying on the ground. Authorities dug into dirt piles and found pieces of old caskets. A cemetery historian concluded that new graves were placed where burials had occurred between 1890 and 1934.

It appears many veterans' gravesites were affected, but an inventory has not been completed, Jansen said. One Civil War veteran's gravestone was found in a maintenance garage.

Officials also found financial records in disarray and unopened mail from 20 years ago.

A police investigation continues and has not resulted in any arrests, nor established the whereabouts of the upkeep money. But a civil court judge in Bridgeport last week ordered LaPrade to stay away from the cemetery, the result of a complaint by Jansen, who said it appears more than 100 graves were either disinterred or had new remains buried above them.

Dale LaPrade did not return phone messages seeking comment from The Associated Press. She appeared in court last week in a wheelchair and told Judge Barbara Bellis, "I've stayed away. I've been trying to get out of the cemetery for 10 years. I've been ill," The Connecticut Post reported.

Meanwhile, Jansen and other relatives of people buried at Park Cemetery have formed a new board faced with huge tasks: confirming that people are buried where they are supposed to be, figuring out what to do with the newer remains that are buried over old ones, and how to fund the cemetery's operations for generations to come.

There are complete burial records dating from the late 1800s to the 1980s, Jansen said. But records from the '80s to the present kept by the LaPrades will need to be "deciphered," she said.

Bill Ackley, who has several generations of relatives buried at Park Cemetery, said it will likely take years and hundreds of thousands of dollars to fix damaged gravestones and restore the property. Relatives are not certain where the money will come from, but they hope for grants and donations.

"It's kind of like, where do you start?" said Ackley, who created a Facebook page called The Deplorable Conditions at Park Cemetery. "Our overall goal ... is that it be able to continue to serve the community and they have comfort knowing the cemetery is being taken care of and their loved ones are where they should be."