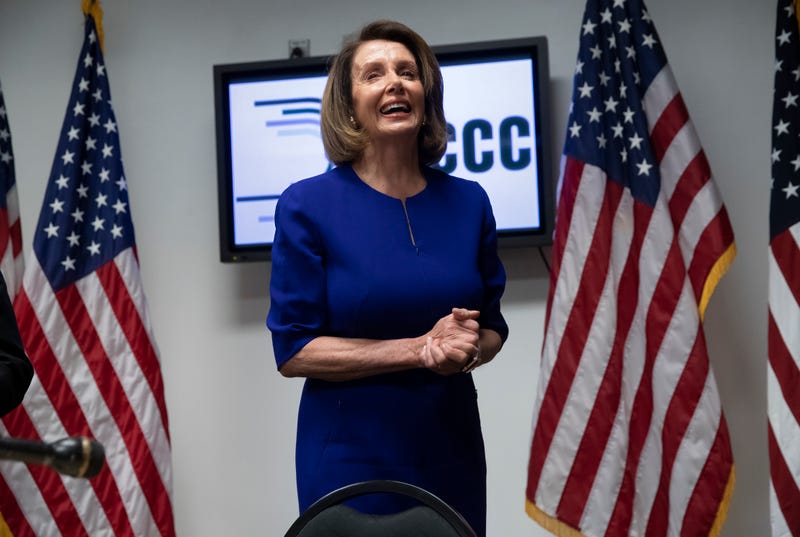 Photo credit FILE - In this Nov. 6, 2018, file photo, House Democratic Leader Nancy Pelosi of California, smiles as she meets with reporters on Election Day at the Democratic National Committee headquarters in Washington. Those trying to stop Pelosi from becoming House speaker say they don’t need a rival now, but instead plan to show she lacks the votes to win, and at that point, they say, challengers will emerge (AP Photo/J. Scott Applewhite, File)
By The Associated Press

WASHINGTON (AP) — Call it the chaos theory for picking the next House speaker.

Those Democrats trying to stop California Rep. Nancy Pelosi from reclaiming the job say they don't need a rival candidate just yet. Instead, they plan to show that Pelosi lacks the votes to win the race. And then, they say, new challengers will emerge.

It's strategy that has other Democrats cringing at the prospect of their new House majority in disarray. They say voters swept them to office in this month's elections to govern, not become bogged down by the kind of Republican infighting that sent Ohio Rep. John Boehner to an early exit as speaker and weakened his successor, Wisconsin Rep. Paul Ryan.

The last thing they want is a floor fight over the leadership post when Congress opens work in January.

"If the first Democratic value they see is chaos, I don't think that's very good," said Rep. Don Beyer, D-Va., who recently wrote an op-ed with colleagues supporting Pelosi. "I don't think it's a good look at all."

The chaos theory will be put to a test this coming week when House Democrats meet in private for a vote nominating Pelosi to become speaker in January. She held that post from 2007 to 2011, the first woman to serve as speaker.

After one potential rival stepped aside, Pelosi is expected to easily win the majority from her ranks. But opponents have hopes of denying her the broader support she needs when the new Congress holds a vote in January.

One of those organizing against her, Rep. Kathleen Rice, D-N.Y., said recently that the lack of a sure-fire challenger is beside the point. The goal is to force the question.

"The whole concept of you can't beat somebody with nobody is a Nancy Pelosi talking point," she said.

As Rice and others in the group led by Reps. Seth Moulton of Massachusetts and Tim Ryan of Ohio see it, it's all in the math.

At the moment, there are at least 15 Pelosi opponents, making for a razor-thin vote. House Democrats won a 233-seat majority in the 435-member House in the November midterm election, with a few races still uncalled. Pelosi needs 218 to win the job, if all Republicans oppose her, which is likely. The margin could expand slightly with absences or if lawmakers simply vote "present."

"The first step is showing that she cannot get to 218," Rice told reporters, "and then I believe the challengers will emerge that can allow new members to say, Ok here's another possibility, now I get it."

Moulton, a Marine veteran, said earlier he hopes it will be "a chaotic debate" for new leadership because "that would be healthy for the party."

But after the election delivered Democrats the House majority, it's an approach that may require a leap of faith that other lawmakers are unwilling to take, especially as Pelosi amasses an outpouring of support from advocacy groups, labor unions and even former President Barack Obama in a display of raw power.

Trying to head off that debate, Pelosi sent a letter to colleagues thanking "so many of you for the strong support you have given me" and asked that "we all support" the party's nominee for speaker when the full House votes. "Our unity is our power," she wrote.

At one point Pelosi's opponents counted 17 Democrats on a letter against Pelosi and were hoping for more. But one by one, some of them started standing down.

A potential rival, Rep. Marcia Fudge, D-Ohio, decided against a challenge, agreeing instead to lead a new subcommittee on voting integrity. Pelosi revived that panel and recommended Fudge for the post, elevating an issue important to the Congressional Black Caucus, especially after close races this month in Florida and Georgia.

Another opponent, Rep. Brian Higgins, D-N.Y., dropped his opposition after he said Pelosi agreed to have him take the lead on his proposal to expand Medicare as an option for those age 50 to 65.

As opponents regrouped, Pelosi was home for the holiday recess in California, working the phones and doling out the kinds of perks that show the potential power of being speaker in ways it hasn't been wielded on Capitol Hill.

Boehner and Ryan struggled to corral their majority since Republicans gained control of the House in 2011. The revolt from within the GOP ranks started with the 2010 tea party election and continued with the Freedom Caucus that pushed Boehner to early retirement. Ryan was able to pass the GOP tax bill into law but the right flank repeatedly flexed its muscle including during California Rep. Kevin McCarthy's recent election as minority leader.

Rep. Betty McCollum, D-Minn., said she remembers being in the House chamber as the Boehner speaker's race teetered, and thinking the dysfunction on display wasn't good for Republicans or Democrats.

She wrote the op-ed with Beyer in part because she cannot imagine facing voters in the St. Paul suburbs back home if a floor fight emerges as the Democratic majority's first order of business.

"People in Minnesota would be very, very disappointed — from disappointed to outrage — that we are blowing an opportunity," she said. "Those voters aren't looking for chaos. They're looking for effective, responsible governing."

Newly elected members, especially those who pledged to oppose Pelosi and make way for a new generation of leaders, are caught in the middle.

One who supports Pelosi, Rep.-elect Katie Hill of California, said Democrats "need to minimize any internal party strife" and "hit the ground running day one."

Rep.-elect Alexandria Ocasio-Cortez of New York said in a tweet: "I hope that we can move swiftly to conclude this discussion about party positions, so that we can spend more time discussing party priorities." She backs Pelosi.

Seasoned lawmakers, including Rep. Emanuel Cleaver, D-Mo., say now is not the moment for a public split.

"I wouldn't want to see it come to the floor, in front of the nation," Cleaver said. "I don't want to shake the confidence of the millions of people who stepped out to vote."