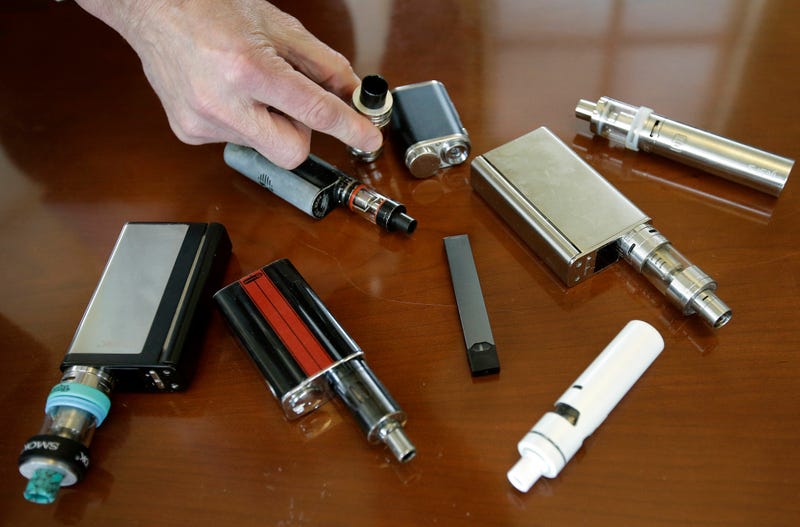 Photo credit FILE - In this Tuesday, April 10, 2018, file photo, a high school principal displays vaping devices that were confiscated from students in such places as restrooms or hallways at the school in Massachusetts. The Food and Drug Administration is planning on requiring strict limits on the sale of most flavored e-cigarettes, including age verification controls for online sales, in an effort to curtail their use among children and teenagers. FDA officials tell The Wall Street Journal on Thursday, Nov. 8, the actions are expected to be announced as early as the following week. (AP Photo/Steven Senne, File)
By The Associated Press

NEW YORK (AP) — The U.S. Food and Drug Administration plans to require strict limits on the sale of most flavored e-cigarettes, including age verification controls for online sales, in an effort to curtail their use among children and teenagers.

FDA officials told The Wall Street Journal on Thursday the actions are expected to be announced as early as next week. The move is an attempt to curb what many are saying is an epidemic of underage vaping.

"What I can't tolerate is another year of this level of growth," FDA Commissioner Scott Gottlieb said in an interview Wednesday.

The new policy will apply to flavored cartridge-style vaping products like Juul that have become popular among youths, not the open tank-style systems sold in vape shops and mostly used by adults, officials said.

No retail outlets will be allowed to carry them unless it restricts minors from entering the store or creates an off-limits area.

Since 2017, FDA officials had discussed e-cigarettes as a potential tool to wean adult smokers off cigarettes, but in September the FDA reversed course and warned the industry to address the problem of surging teenage e-cigarette use or risk having their flavored products pulled off the market.

Gottlieb said then that the agency did not predict an "epidemic addiction" among youth, mainly driven by flavored products.

The FDA's new restrictions were earlier reported by The Washington Post.

Also Thursday, New York Gov. Andrew Cuomo's administration announced plans to ban the sale of flavored e-cigarettes as soon as next year, possibly making his state the first to prohibit such vaping products often marketed as a safer alternative to traditional cigarettes.