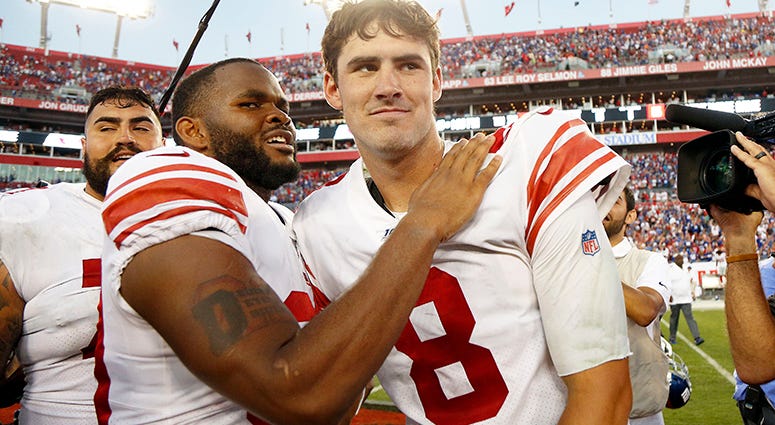 TAMPA, Fla. (AP) — The Daniel Jones era is off to a rousing start for the New York Giants.

The rookie quarterback threw for 336 yards and two touchdowns and also ran for two TDs, including the go-ahead score with 1:16 remaining as the Giants rallied from an 18-point halftime deficit to beat the Tampa Bay Buccaneers 32-31 on Sunday.

Jameis Winston threw for 380 yards and put the Bucs (1-2) in position to pull out a dramatic win, but rookie Matt Gay's 34-yard field goal sailed wide right as time expired.

Jones scored on a 7-yard run in the second quarter and put the Giants ahead with another 7-yarder on fourth-and-goal. The sixth pick in this year's draft began New York's comeback with a 75-yard TD pass to Evan Engram on the first play of the second half, and a 7-yarder to Sterling Shepard midway through the third quarter.

Winston threw TD passes of 21, 3 and 20 yards to Mike Evans to help Tampa Bay build a 28-10 halftime lead. His 44-yard completion to the Giants 9 set up the last-second field goal try by Gay, who also missed an extra point and had another blocked.

As impressive as the former Duke standout was, he was not perfect. Shaquil Barrett had four of Tampa Bay's five sacks and forced a fumble that led to a field goal that put Tampa Bay up 31-25 with six minutes to go.

Jones also lost a fumble that led to one of Winston's TD passes to Evans, who finished with eight catches for 190 yards.

Engram's long catch and run was the highlight of a six-catch, 113-yard performance. Shepard, back in the lineup after missing the previous game with a concussion, had seven catches for 100 yards, including a 36-yarder that set up the winning touchdown.

Jones played one series in New York's season-opening loss to Dallas. Manning replaced Kurt Warner after the ninth game of his rookie season in 2004 and started 232 of New York's next 233 regular-season games. The Giants averaged 420 yards on offense in the first two games this year, but only scored four touchdowns while averaging 15.5 points.

The 38-year-old Manning was Jones' backup, but did not accompany New York's other captains to midfield for the pregame coin toss.

Giants: LB Alec Ogletree left in the second quarter after injuring a hamstring during his runback of a fumble that was later reversed by replay and ruled an incomplete pass. ... Barkley limped off the field with a little over three minutes remaining before halftime and was on crutches afterward. ... LB Tae Davis left with a concussion in the second half.

Buccaneers: ILB Devin White, the fifth pick in the draft, was inactive due to a knee injury.

Buccaneers: at Los Angeles Rams, beginning stretch in which they won't play at home again until Nov. 10.