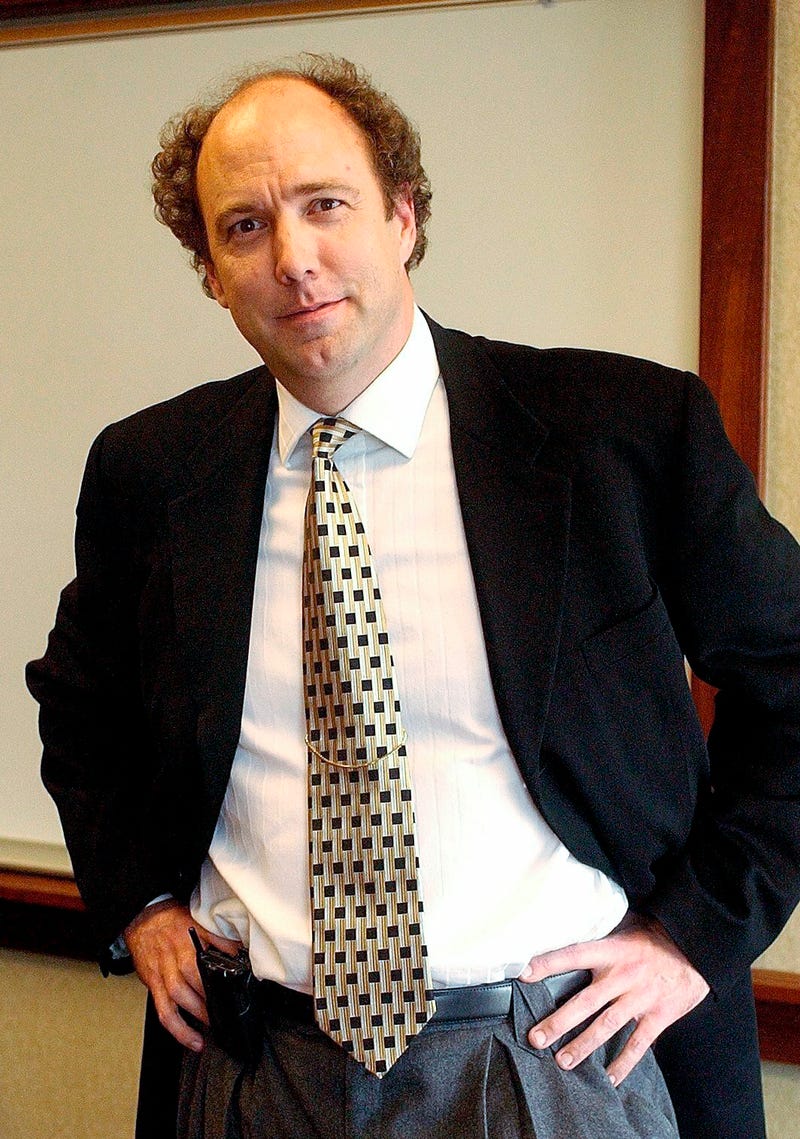 Photo credit In this May 25, 2003, photo, Paul Erickson, a Vermillion native, poses for a photo. The American political operative, Erickson, linked to admitted Russian covert agent Maria Butina was accused this week of fraud. Erickson pleaded not guilty Wednesday, Feb. 6, 2019, to 11 counts of wire fraud and money laundering in business schemes that stretched from 1996 through August 2018, according to federal prosecutors in South Dakota. (Lloyd B. Cunningham/The Argus Leader via AP)
By The Associated Press

PIERRE, S.D. (AP) — Paul Erickson, the boyfriend of admitted Russian covert agent Maria Butina accused this week of fraud, has turned up in the unlikeliest of places — from landing a top spot on Pat Buchanan's 1992 presidential campaign to representing a man involved in one of the most salacious trials of the 1990s.

From his youth in Vermillion, South Dakota, Erickson parlayed a network of contacts with the College Republicans into an odyssey of business and political adventures on the fringes of celebrity over more than two decades.

He was national political director for Buchanan's insurgent bid to topple President George H. W. Bush in the 1992 Republican primary. He was a media adviser to John Wayne Bobbitt, the Virginia man whose wife cut off his penis with a kitchen knife in 1993. He joined with Jack Abramoff, a Washington lobbyist later imprisoned for corruption, in producing an anti-communist action movie. And he represented the African dictator Mobutu Sese Seko when the president of then Zaire wanted to enter the United States.

Erickson has also said that he was in Israel in 1982 when its troops temporarily occupied southern Lebanon. The next year, he claimed that he helped supply tents, boots, camels, mules to fighters combatting the Soviet Union in Afghanistan.

Along the way, Erickson also left a trail of aggrieved associates from his business dealings back in the Dakotas.

Erickson, 57, pleaded not guilty this week to 11 counts of wire fraud and money laundering in business schemes that stretched from 1996 through August 2018, according to federal prosecutors in South Dakota. Butina pleaded guilty in December for trying to infiltrate conservative political groups as a Kremlin secret agent, a case that was separate from special counsel Robert Mueller's investigation into Russian meddling in the 2016 U.S. presidential election.

"Paul is a very charismatic gentleman," said Daniel Bielfeldt, an aggrieved investor. "I just think the whole thing is sad because he is a very intelligent person and to use his talents to deceive people is wrong. He could have earned a lot more money doing the right thing."

The fraud indictment was filed after Erickson got caught up in the firestorm over Butina's work seeking to use contacts in the National Rifle Association to pursue back channels to American conservatives during the 2016 campaign.

Prosecutors now accuse Erickson of concocting schemes to carry out well over $1 million in fraudulent transactions using company names such as Investing with Dignity, a business purportedly developing a wheelchair that allowed a person to use the bathroom from the chair and Compass Care, which he said developed assisted living homes for elderly people.

It's unclear why Erickson's indictment came Tuesday, after more than 20 years of alleged wrongdoing. The U.S. Attorney's Office in South Dakota declined to comment about the investigation. The charges carry a penalty of up to 20 years per count.

Erickson's Sioux Falls lawyer, Clint Sargent, said he is "anxious to let the criminal justice process play out and believes a story different from the government's will emerge." When Butina entered her plea in December, attorney William Hurd said Erickson "has done nothing to harm our country and never would." It's not clear if Erickson will face charges in that case.

Those who've met Erickson have been guarded in what they say about him since he popped up as a figure in Butina's case.

One of those who view him as an unsavory character is South Dakota Republican lawmaker Lee Schoenbeck, whose experience with Erickson goes back to their time in the College Republicans. Erickson landed a job on Jim Abdnor's 1980 campaign that ousted George McGovern from the U.S. Senate, but Erickson didn't ever show up for work, Schoenbeck said.

"I've just always known him as a fraud," Schoenbeck said.

Former South Dakota House Speaker Harvey Krautschun, who was a Republican candidate for lieutenant governor in 2002, said Erickson was an acquaintance who worked on the campaign. Krautschun said Erickson was "on fire" for politics, but he never felt there was anything unsavory about Erickson at the time.

"He ate and slept and breathed politics," Krautschun said. "If there was a thing known as political blood, he had it."

Erickson worked in 1992 for Buchanan's campaign at a time when many established Republican operatives shied away from trying to unseat the sitting president of the United States. As Bobbitt's media adviser, Erickson booked an international tour in which the man whose penis was lopped off and reattached sold shirts and steak knives, the Rapid City Journal reported.

Public records in South Dakota include at least seven court judgments for more than $421,000 against Erickson or his companies since 2003, according to the Rapid City Journal. Several of the court cases that produced the judgments include evidence of Erickson writing bad checks to creditors.

Bielfeldt and his son, Daniel, developers from Brookings, South Dakota, sued Erickson in 2015. They had been persuaded by Erickson in 2009 to invest a combined $30,000 in a company called Dignity Medical Inc.

The Bielfeldts reached a $30,000 settlement with Erickson and received their first check for $10,000 but the other checks bounced, the Journal reported. The Bielfeldts eventually won a judgment against Erickson in January 2017 for about $41,000.

Conservative syndicated writer L. Brent Bozell III sued Erickson in 2007. Bozell said in the lawsuit that he had been persuaded to invest $200,000 in Compass Care, which Erickson founded in 1996. Bozell sued for breach of contract and won a $190,000 judgment in 2008, but it's not clear if he received the money.

Court documents in the lawsuits by the Bielfeldts and Bozell show that Erickson predicted returns ranging from 25 to 100 percent.

In another lawsuit, Erickson was ordered in 2003 to pay more than $115,417 to Bluestem Capital Partners, the venture capital firm of Steve Kirby, who is a Republican former lieutenant governor of South Dakota. Court documents show Bluestem had lent Erickson money for Compass Care that he failed to pay back in time, the Journal reported. Kirby did not return a phone message left Thursday by The Associated Press.

Casey Phillips, now a political strategist and consultant in Virginia, said he met Erickson in the early 2000s while he was a College Republican in South Dakota. Erickson was always "hanging around" and was quick to try to help or share a lesson. The two have kept in touch, Phillips said, but he never met Butina. Erickson sent him a birthday card in October.

"Paul Erickson is a great guy to have a beer with," Phillips said. "It looks like he charmed his way into trouble, and I feel terrible for him and for anyone he hurt along the way."