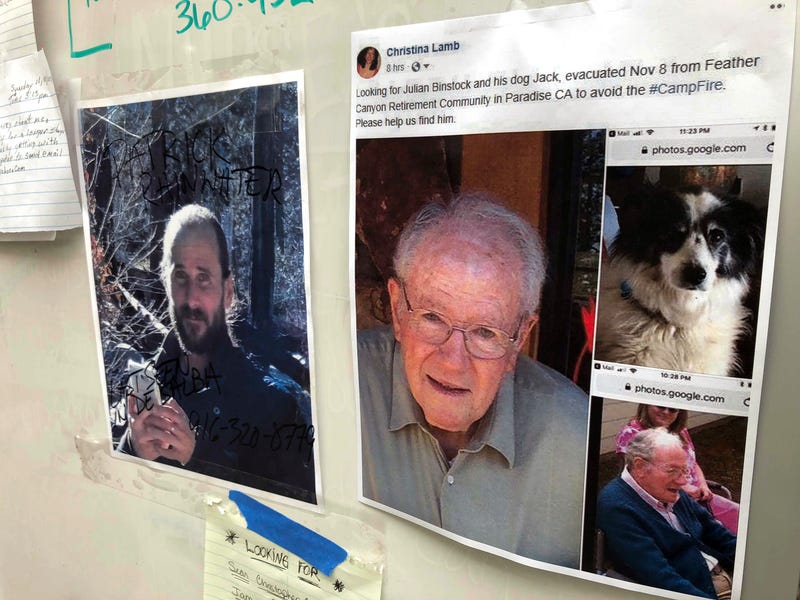 Photo credit FILE - In this Nov. 13, 2018 file photo, messages are shown on a bulletin board at The Neighborhood Church in Chico, Calif., as evacuees, family and friends search for people missing from the northern California wildfire. Northern California officials have struggled to get a handle on the number of missing from the deadliest wildfire in at least a century in the United States. Authorities continue to log hundreds of reports by people who couldn't reach loved ones in the aftermath of the Camp Fire in Butte County. (AP Photo/Gillian Flaccus, File)
By The Associated Press

SAN FRANCISCO (AP) — More than 1,000 people are unaccounted for after a deadly Northern California wildfire, but authorities warned Friday that the roster is fluid and contains "raw data," including the possibility of duplicate names.

Some of the people on the ever-evolving list compiled by the Butte County sheriff's office have been confirmed dead by family and friends on social media. Others have been found safe, but authorities have not yet marked them as such.

"My husband and I are not missing and never were!" Conry wrote Thursday night on a Facebook page dedicated to finding people from the fire zone in and around the incinerated town of Paradise. "We have no family looking for us ... I called and left a message to take our names off."

The confusion stems from the difficulty authorities face putting together a tally of the missing as they pore through hundreds of reports filed by people who could not reach loved ones in the aftermath of a blaze that spread with astonishing speed last week. It became the deadliest U.S. wildfire in a century.

Butte County Sheriff Kory Honea initially said 110 were missing, then revised the number to more than 220. He put it at 130 on Wednesday but released a list the same night with 300 names.

He dramatically raised the number to 631 late Thursday and then to 1,011 on Friday.

"The chaos that we were dealing with was extraordinary. Now, we're trying to go back out and make sure that we're accounting for everyone," Honea said, explaining that deputies were recording the earliest dispatch reports.

Jan Walcott of Oakland has been tweeting since the day after the fire started Nov. 8 that she was looking for her 78-year-old sister, Joyce Acheson, who lives in Paradise and has disabilities.

When the list of missing emerged, her sister's name was on it, along with someone with a similar spelling, Joyce Atchison — prompting speculation they might be the same person. But that's not the case.

"There were two people with similar names, and it caused confusion," Walcott said.

Her sister has still not been located. She said she is staying in touch with the sheriff's office and checking social media for updates.

The wildfire has killed at least 71 people, with the number climbing daily.

Sheriff's office spokeswoman Miranda Bowersox said Friday that the list of people who are unaccounted for is not a real-time reflection of who is missing. She said the office is distributing the names widely in the hope anyone on it might call in and say they're OK.

"They might not be in the area anymore. There might be friends and family here who don't know they left, that they went to another area," she said.

Conry, whose Paradise house escaped largely unscathed, said she left a voicemail with the sheriff's office Thursday night and called again Friday morning and talked to a person.

"She was excited to hear that we were OK," said Conry, who is 55 and not 72 as the list reported.

Conry said friends and family knew she and her husband were all right because they had her cellphone numbers and she was posting on social media. She realizes that might not be the case for others.

"Nobody calls our home line except for telemarketers," she said.

In last year's wine country wildfires, Sonoma County authorities at one point listed more than 2,000 people as missing but slowly whittled down the number. In the end, 44 people died in that series of fires in several California counties.

This story has been corrected to show Butte County Sheriff Kory Honea's name was misspelled.