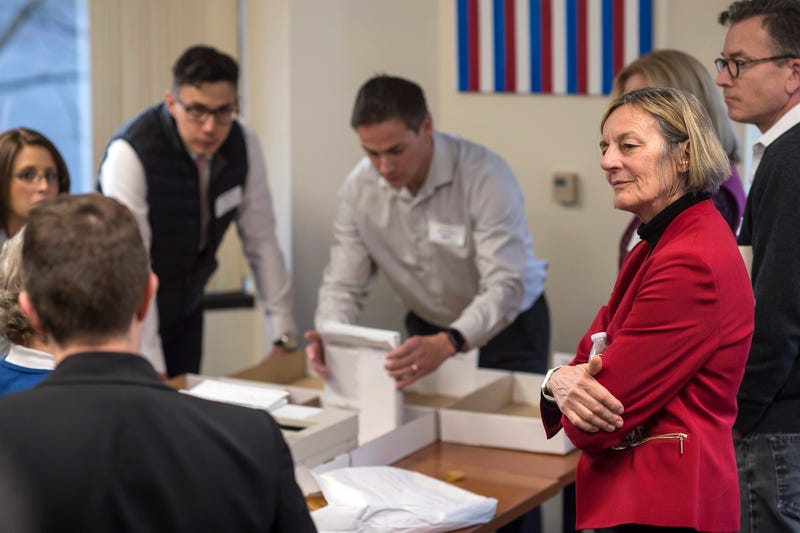 Photo credit Alaska House District 1 candidate Democrat Kathryn Dodge, right, watches the election recount at the Department of Elections' Juneau office on Friday, Nov. 30, 2018. A single mystery ballot found on a precinct table on Election Day but not counted then could decide a tied Alaska state House race and thwart Republican efforts to control the chamber and all of state government. The ballot arrived in Juneau last Friday in a secrecy sleeve in a bin with other ballot materials. Officials were investigating its origins and handling before deciding whether to tally it. (Michael Penn/The Juneau Empire via AP)
By The Associated Press

Before Friday's recount, LeBon and Democrat Kathryn Dodge were tied with 2,661 votes apiece.

Recount results showed LeBon with 2,663 votes while Dodge had 2,662 votes, after LeBon picked up two votes and Dodge picked up one, according to the Alaska Division of Elections.

A much talked about mystery ballot found weeks ago on a table in a voting precinct ended up playing no role in the race outcome. The ballot was tossed Friday after officials said it was determined to be a spoiled ballot from a voter who had made a mistake on it, told officials and then filled out a new ballot.

If LeBon's win holds up, the GOP will control the House, Senate and governor's office.

Dodge has five days to decide whether to appeal the outcome to the state Supreme Court. She didn't make a definitive comment after the recount, saying she and her team would "think on things," the Juneau Empire reported .

"People kept calling it close," Dodge previously said of the race. "I just didn't know it was going to be squeaky."

For the candidates, it's been a three-week rollercoaster ride marked by lead changes before the tie was declared and by the appearance of the mystery ballot.

Elections director Josie Bahnke had said she had wanted to ensure that every vote cast by an eligible voter was counted.

LeBon, a retired banker, said previously he expected a legal challenge from whoever loses the recount. He said Friday that he didn't think the race was over.

"I'm pretty sure this has got another layer to it," he said. "I would be thrilled if it was over, but is this over? I just don't think so."

If a legal challenge resulted in another tie, the winner would to be determined by a coin toss.

The current House speaker, Democrat Bryce Edgmon, won the 2006 primary through a coin toss on his way to being elected to the chamber later that year.

Remembering the coin toss is exciting, he said, but the experience is "not something I would wish for anybody to go through."