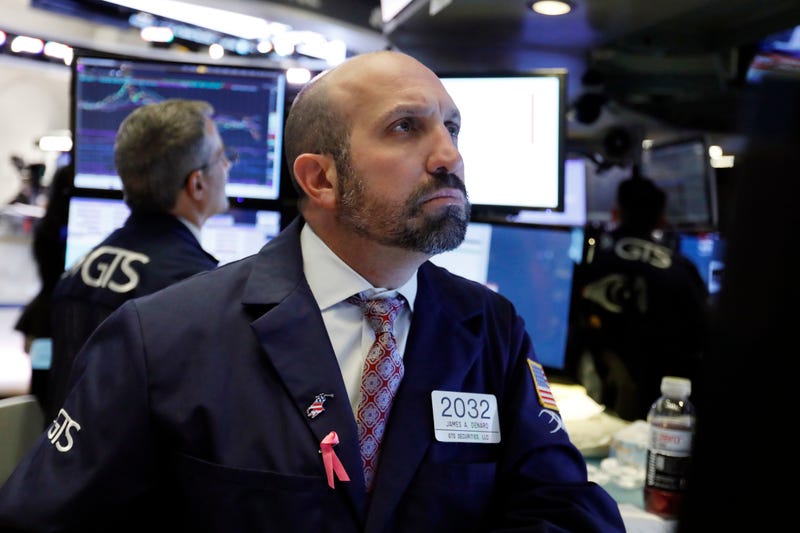 NEW YORK (AP) — Stocks sank again Monday on fears that the Trump administration will escalate its trade dispute with China by imposing tariffs on all remaining imports from China to the U.S.

The declines came during another dizzying day of trading. The Dow Jones Industrial Average swung between a gain of 352 points and a loss of 566 before closing down 245.39 points, or 1 percent, to 24,442.92.

Bloomberg News reported in the afternoon that the Trump administration will put tariffs on the rest of the country's imports from China if Presidents Donald Trump and Xi Jinping don't make substantial progress in easing the trade dispute next month. The month comes in the midst of a corporate earnings season where a number of big companies have warned that tariffs already in place have raised their costs.

Technology and internet companies, industrials and retailers took steep losses after the Bloomberg report as Wall Street's recent bout of volatility continued. The S&P 500 index has dropped 9.4 percent in October and is on track for its worst monthly loss since February 2009. That was right before the market hit its lowest point during the 2008-09 financial crisis.

Stocks have plunged since early October, breaking a long period of relative calm over the summer, and trading has been especially volatile the last few days.

Amazon.com dropped another 6.3 percent to $1,538.88. The online retailer tumbled Friday after it reported weak sales and gave a lower-than-expected revenue estimate for the quarter that includes the holiday shopping season. Its stock traded above $2,000 a share in early September and has fallen 24.5 percent since then.

For most of this year investors have remained hopeful that the U.S. and China would work out their disagreements on trade policy and that many of the tariffs would be reduced or eliminated. But in recent weeks they've lost some of their confidence, and their fear that the dispute will last longer and have bigger effects has contributed to the market's tumble.

The effects of higher tariffs could be especially severe for technology companies, which make many of their products in China, and for industrial companies, which are already paying higher prices for metals. The U.S. and China are the world's largest economies and their trade relationship is the world's largest, so the higher taxes on imports could also slow global economic growth and increase inflation.

The prospect of reduced barriers to trade helped auto makers on Monday. Car companies rose after Bloomberg News reported that regulators in China intend to propose cutting the tax on imported cars to 5 percent from 10 percent. The trade fight between the U.S. and China has hurt sales, and that slowdown is one of several factors that have damaged car company stocks this year.

Mexico's stock index shed 4.2 percent after President-elect Andres Manuel Lopez Obrador said he will respect the result of a referendum that rejected a partly-built new airport for Mexico City. He said 70 percent of voters opposed the $13 billion project.

Brazil's Bovespa rose in morning trading after far-right politician Jair Bolsonaro was elected president, but it later turned lower and lost 2.2 percent. Stocks climbed earlier this month after Bolsonaro led the previous round of voting, as investors preferred him to leftist parties.

Bond prices dipped. The yield on the 10-year Treasury note rose to 3.08 percent from 3.07 percent.

AP Markets Writer Marley Jay can be reached at http://twitter.com/MarleyJayAP