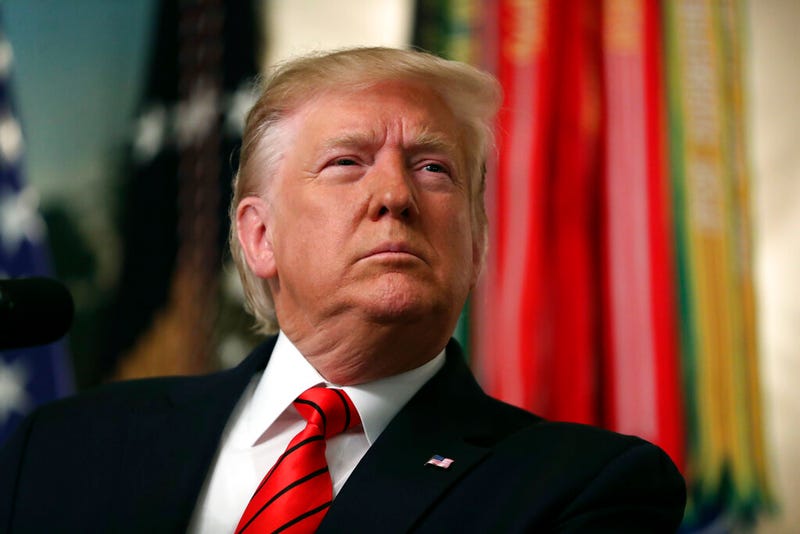 WASHINGTON (AP) — The Latest on Abu Bakr al-Baghdadi, the leader of the Islamic State group who was killed in a U.S. military raid in Syria, according to President Donald Trump (all times local):

President Donald Trump says the U.S. military raid that took out Islamic State leader Abu Bakr al-Baghdadi is a bigger deal than the 2011 killing of Osama bin Laden during the Obama administration.

Trump is detailing the operation during an announcement at the White House.

The president acknowledges that the death of bin Laden was significant, but he believes the news about al-Baghdadi is even bigger news.

Trump says that bin Laden didn't become a global name in terrorism until the attacks of Sept. 11, 2001. The president says that's in contrast to al-Baghdadi, who Trump says is responsible for building a caliphate.

Trump is sharing extensive details from the mission during a televised address from the White House on Sunday.

He says debris from the tunnel where Bakr al-Baghdadi blew himself up in using an explosive vest made it difficult to get to his body.

But Trump says Americans were able to move the debris and confirm al-Baghdadi's identity.

Trump says those involved in the raid "brought body parts" back with them, even though there "wasn't much left" of al-Baghdadi's body.

He says "they have his DNA. More of it than they want."

President Donald Trump says that watching the raid that killed Islamic State group leader Abu Bakr al-Baghdadi in Syria as it was underway felt "as though you were watching a movie."

And he's suggesting that the video be released to the public to dissuade al-Baghdadi's followers.

Trump says that he watched much of the mission unfold from the White House Situation Room on Saturday night.

Trump says at the White House on Sunday that the U.S. had al-Baghdadi under surveillance for several weeks. He says that during the raid, U.S. forces flew low and fast, and were met with gunfire at points.

Trump is also suggesting that the footage of the raid may be released publicly so that the world knows al-Baghdadi spent his final moments "crying, "whimpering" and "screaming."

Trump is describing the U.S. raid in Syria that killed perhaps the world's most wanted man.

The president says during remarks from the White House's Diplomatic Room that al-Baghdadi spent his last moments in utter fear and claims that the IS leader was "whimpering and crying" and died as "a coward, running and crying."

Trump had teased the announcement with a tweet Saturday night, declaring that "Something very big has just happened!"

He says the U.S. received immediate and positive identification on the body and that the world is now a much safer place.

Trump says in a statement to the nation from the White House's Diplomatic Room that "al-Baghdadi is dead" — fulfilling the top national security priority of his administration.

He says no U.S. personnel were lost in the mission.

The announcement comes as Trump has been on the receiving end of bipartisan criticism in Washington following the recent pullback of U.S. troops from northeastern Syria. Critics fear that move will allow the militant group to regain strength after it had lost vast stretches of territory it had once controlled

A senior Turkish official says that "to the best of my knowledge," Abu Bakr al-Baghdadi arrived at a location in Syria 48 hours before the U.S. military raid that's believed to have targeted the Islamic State group leader.

The Turkish official says in a written statement Sunday that there's been "close coordination" among relevant parties and that the Turkish military had advanced knowledge of the raid.

Turkey's army said earlier in a tweet that it had "information exchanged and coordination" with U.S. military authorities before the operation.

The U.S. raid with helicopters took place in the Barisha area north of Idlib city — a few kilometers from the Turkish border.

Abu Bakr al-Baghdadi, the shadowy leader of the Islamic State group, had a $25 million U.S. bounty on his head.

He'd kept a low public profile in recent years, releasing only sporadic audio recordings. In a recording just last month, he called on members of the extremist group to do all they could to free IS detainees and women held in jails and camps.

That purported audio was his first public statement since last April, when he appeared in a video for the first time in five years.

The video included images of the IS leader sitting in a white room with three others. He praised Easter Day bombings that killed more than 250 people and called on militants to be a "thorn" against their enemies.