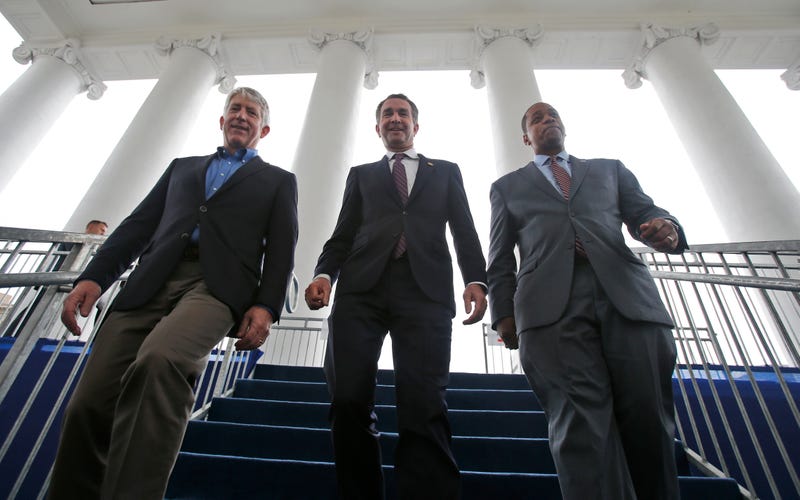 Photo credit FILE - In this Jan. 12, 2018 file photo, Virginia Gov.-elect, Lt. Gov Ralph Northam, center, walks down the reviewing stand with Lt. Gov-elect, Justin Fairfax, right, and Attorney General Mark Herring at the Capitol in Richmond, Va. The political crisis in Virginia exploded Wednesday, Feb. 6, 2019, when the state's attorney general confessed to putting on blackface in the 1980s and a woman went public with detailed allegations of sexual assault against the lieutenant governor. With Northam's career already hanging by a thread over a racist photo, the day's developments threatened to take down all three of Virginia's top elected officials. (AP Photo/Steve Helber, File)
By The Associated Press

RICHMOND, Va. (AP) — Confronted with a three-ring scandal in the party's top ranks, Virginia Democrats are trying to thread the needle, demanding anew that Gov. Ralph Northam resign but giving the benefit of the doubt — for the time being — to the lieutenant governor and attorney general.

Key Democratic groups began weighing in late Thursday after the widening crisis rendered them practically speechless for a day. Northam and Attorney General Mark Herring have admitted wearing blackface as young men in the 1980s, while Lt. Gov. Justin Fairfax is accused of sexually assaulting a woman 15 years ago, an allegation he denies.

In a statement, the Virginia legislature's Black Caucus acknowledged the seriousness of all three controversies but added: "Our responses to each, however, must be based on their individual facts and circumstances."

While the Democratic Party has taken almost a zero-tolerance approach to misconduct among its members in this #MeToo era, a housecleaning in Virginia could be costly: If all three Democrats resigned, Republican House Speaker Kirk Cox would become governor.

The Black Caucus and Democratic congressional delegation reiterated their calls for the governor to step down, and the state House Democrats — who also previously called for Northam's resignation — said they remain disappointed in him.

As for Herring, the Black Caucus and congressional delegation cited his efforts to personally apologize to individual lawmakers in explaining why they were responding differently to his blackface admission.

"The attorney general has earnestly reached out to each of us to apologize and express his deep remorse," said a statement by Virginia's two U.S. senators and seven Democratic members of Congress.

As for Fairfax, the black lawmakers said the sexual assault allegation against him must be "thoroughly investigated by the appropriate agencies." The House Democrats said they would "continue to monitor" the accusation, while the congressional delegation said it respects "the right of women to come forward and be heard."

If Fairfax ascends to the top office, he would be Virginia's second black governor.

The district attorney's office in Boston declined to say whether it is investigating. A California college professor has said Fairfax forced her to perform oral sex on him at a hotel in 2004 during the Democratic National Convention in Boston. Fairfax has cast the allegations as a political smear.

On Thursday, President Donald Trump accused the Democrats of a double standard, tweeting: "If the three failing pols were Republicans, far stronger action would be taken."

Northam, 59, has been under fire for a week over a photo in his 1984 medical school yearbook that showed someone in blackface and another person in a Ku Klux Klan hood and robe.

He at first admitted he was in the picture, then denied it a day later, but acknowledged he once blackened his face with shoe polish to imitate Michael Jackson for a dance contest in 1984.

His critics have faulted him for both his handling of the picture and his blackface admission.

Virginia Democrats fear the crises could jeopardize their chances of taking control of the GOP-dominated legislature this year after big gains in 2017.