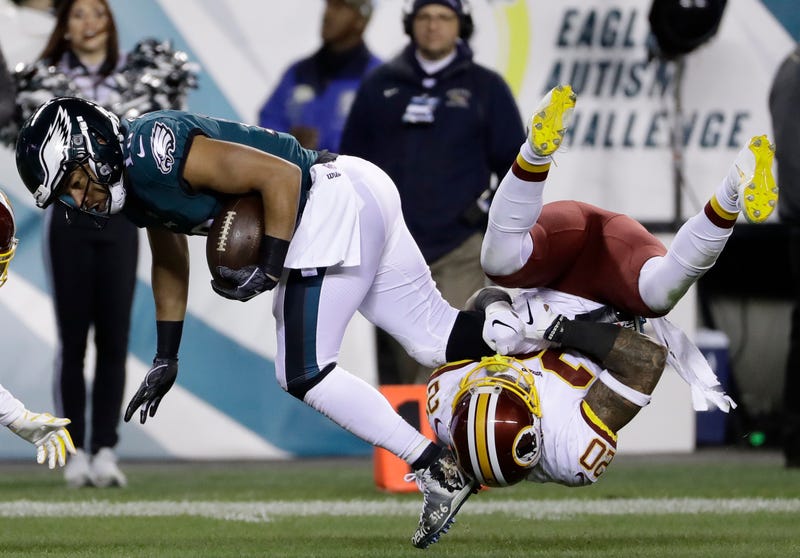 PHILADELPHIA (AP) — Carson Wentz ran around and extended plays the way he did before his knee injury.

Wentz tossed two touchdown passes, Darren Sproles ran for a score and the Philadelphia Eagles stayed in the hunt for the NFC East title with a 28-13 victory over the depleted Washington Redskins on Monday night.

The Eagles (6-6) won consecutive games for the first time since Nick Foles led them to a Super Bowl victory over the Patriots.

Redskins coach Jay Gruden said after the game that, from what he understands, McCoy fractured his fibula and will miss the rest of the season.

Adrian Peterson ran 90 yards for a touchdown on Sanchez's first play under center, giving the Redskins a 10-7 lead. It was the longest run Philadelphia has allowed in franchise history but Washington's lead didn't last long.

Wentz, who hasn't scrambled much since returning in Week 3 from surgery to repair two knee ligaments, didn't run for any yards. But he was on the move quite a bit on designed rollouts and plays in which he improvised and completed passes.

Sproles put Philadelphia up 14-10 on a 14-yard TD run in the second quarter. Wentz tossed a 4-yard TD pass to Jordan Matthews and connected with Golden Tate on a 2-point conversion to extend the lead to 22-13 early in the fourth quarter.

The Eagles twice failed to score inside the red zone and still managed their second-highest point total this season.

They had a first down at the Redskins 2 in the second quarter, but Josh Adams was stopped for a loss on fourth down from the 1.

They had a first down at the Redskins 5 in the third quarter, but Wentz threw an interception right to Josh Norman.

Wentz finished 27 of 39 for 306 yards. He came out firing and led the Eagles to a score on their opening drive for only the third time season.

First, he scrambled out of the pocket, motioned Tate to go deep and lofted a 19-yard pass down the left sideline on a first-and-15. Wentz finished the drive by firing a 6-yard TD pass on the run to Tate.

Dustin Hopkins kicked field goals of 47 and 44 yards for Washington.

Sproles scored his first TD since Dec. 22, 2016. Sproles only played three games last season before he tore a knee ligament and broke his forearm on the same play. He was sidelined since Week 1 this year because of a hamstring injury.

Zach Ertz broke Brian Westbrook's franchise record for receptions in a season. Ertz has 93 catches and is closing in on Jason Witten's single-season record (110) for tight ends. Westbrook had 90 catches in 2007.

Eagles: DT Tim Jernigan (back spasms) left in the first quarter and LT Jason Peters came out on the final series with an undisclosed injury.