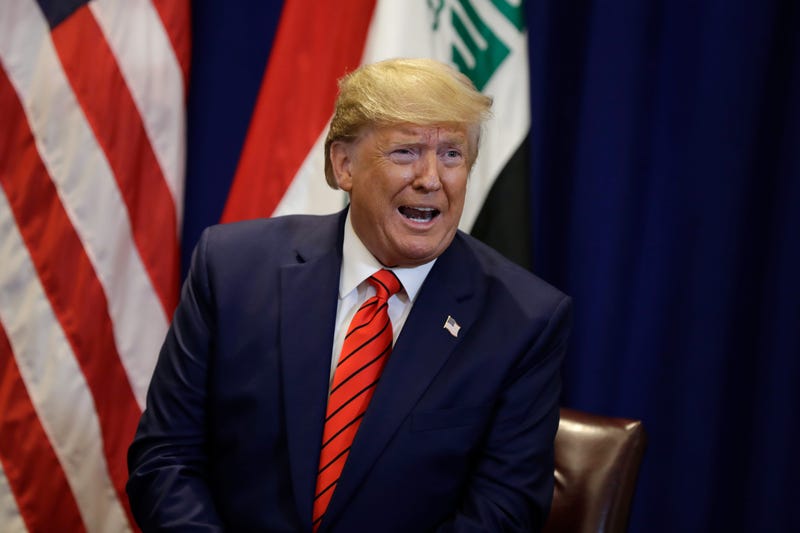 (AP/KYW) — The Latest on President Donald Trump and the House impeachment inquiry (all times local):

The intelligence community's inspector general told the acting director of national intelligence that a call between President Donald Trump and Ukraine's leader could have been a federal campaign finance violation.

But the Justice Department determined the president did not commit a crime after prosecutors reviewed a rough transcript of the July 25 call.

A Justice Department official says the inspector general suspected that the call could have been a violation of federal law if the president was soliciting a campaign contribution from a foreign government by asking the Ukraine leader to investigate a political opponent.

The official says that was based on the whistleblower's complaint and the inspector general didn't have access to a rough transcript of the call.

Prosecutors from the Justice Department reviewed a rough transcript of the call and determined the president did not violate campaign finance law.

The official spoke on condition of anonymity in order to discuss internal investigative deliberations.

The conversation between Trump and Ukraine's president is just one piece of a whistleblower's complaint made in mid-August.

The complaint is central to the impeachment inquiry announced Tuesday by House Speaker Nancy Pelosi.

Trump told the Ukrainian president "If you can look into it ... it sounds horrible to me." Trump was talking about unsubstantiated allegations that Biden sought to interfere with a Ukrainian prosecutor's investigation of his son, Hunter.

Trump also confirmed that he ordered his staff to freeze nearly $400 million in aid to Ukraine a few days before the call.

The president says he did nothing wrong.

The chairman of the House Intelligence Committee is demanding that Attorney General William Barr produce the legal basis for withholding a whistleblower's complaint against President Donald Trump.

Democratic Rep. Adam Schiff of California said Wednesday in a letter to Barr that the refusal to turn over the complaint risks raising "the specter that the department has participated in a dangerous cover-up to protect the president."

Schiff says the statute "makes no provision" for withholding the information from Congress. He wants the Office of Legal Counsel's reasoning.

The administration is considering whether to release the complaint, which is based in part on Trump's conversation to the Ukraine president that reportedly involved digging up dirt on rival Joe Biden.

But Schiff told reporters the administration has communicated "nothing" about its intentions.

Trump has denied doing anything wrong.

The House intelligence committee chairman says regardless of what a transcript of President Donald Trump's phone call with Ukraine's leader says, Trump himself has said plenty to warrant an impeachment inquiry.

Trump plans to release the transcript Wednesday. On Tuesday, Trump criticized House Democrats for opening an impeachment probe without seeing the transcript of the call.

Chairman Adam Schiff told "CBS This Morning" Wednesday that "what the president has said publicly is damning enough."

The impeachment probe focuses partly on whether Trump abused his presidential powers and sought help from Ukraine to undermine Democratic foe Joe Biden and investigate his son, Hunter Biden.

Trump has acknowledged temporarily freezing $400 million in military aid for Ukraine but denied it was leverage for information on the Bidens.

Schiff said national security is at risk "when the president would use military assistance to an ally as a cudgel."

Schiff says there's "no reason to wait" to see a whistleblower's complaint or a transcript of the call between Trump and Ukraine's president before starting the impeachment inquiry.

House Speaker Nancy Pelosi has launched a formal impeachment inquiry against President Donald Trump, yielding to mounting pressure from fellow Democrats and plunging a deeply divided nation into an election-year clash between Congress and the commander in chief.

The probe focuses partly on whether Trump abused his presidential powers and sought help from a foreign government to undermine Democratic foe Joe Biden and help his own reelection. Pelosi said Tuesday such actions would mark a "betrayal of his oath of office" and declared, "No one is above the law."

The impeachment inquiry, after months of investigations by House Democrats of the Trump administration, sets up the party's most direct and consequential confrontation with the president, injects deep uncertainty into the 2020 election campaign and tests anew the nation's constitutional system of checks and balances.