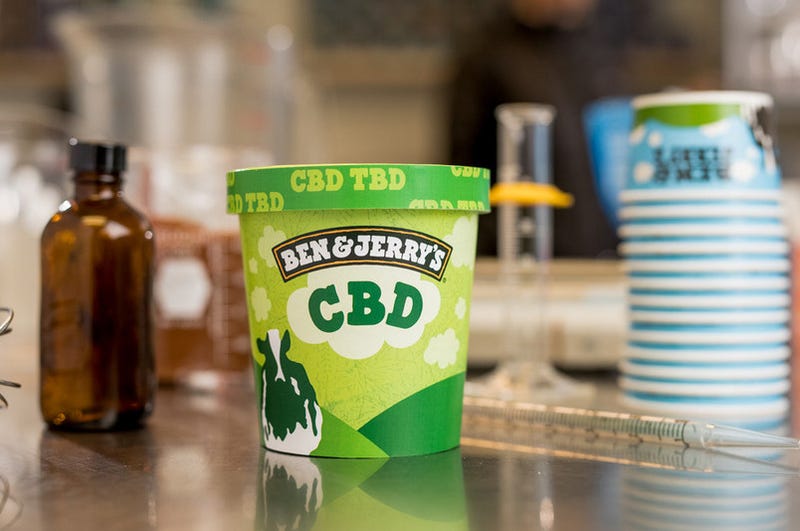 Ben & Jerry’s wants you to chill.

The ice cream manufacturer has announced its plans to get into the booming cannabidiol business by including CBD into their future products.

If all goes as planned, Ben & Jerry’s will introduce a CBD-infused ice cream once the non-psychoactive cannabis compound is legalized across the country.

"We're doing this for our fans," the Vermont-based brand said in a press release. “We aspire to love our fans more than they love us and we want to give them what they're looking for in a fun, Ben & Jerry's way."

To get customers even more excited of what’s to come, the company also tweeted a preliminary image of the ice cream in a green container with the label “CBD TBD.”

CBD-based products have been growing in popularity largely due to the cannabis compound’s alleged health benefits which include better sleep, reduced anxiety and pain relief.

Although clinical studies have yet to back up these claims, Wall Street analysts believe the CBD industry could be worth around $16 billion by 2025.

And while Congress legalized CBD derived from hemp last year, the Food & Drug Agency has prohibited companies from adding it to food, beverages or dietary supplements.

But this could all change shortly, as the FDA is holding a public hearing with manufacturers, researchers, farmers, retailers and others to decide the next steps for CBD regulation.

But Ben & Jerry’s isn’t wasting anytime and already has plans to use sustainably-sourced CBD from Vermont once the ice cream gets through the development stage.

With prior stoner-friendly flavors like Half Baked and Bonnaroo Buzz, Ben & Jerry’s CBD ice cream is sure to be all the buzz.

sports
Kemba Walker was reportedly 'heartbroken' after Celtics traded him to Thunder
music
The 7 highest-grossing music biopic movies of all time
music
The Kardashians claim to promote 'being healthy' rather than unattainable beauty standards
sports
Harlem Globetrotters petition to become NBA team: 'You can't just act like we don't exist anymore'
sports
Jeff Darlington: People ‘underestimate’ how close Tom Brady was to joining Saints
music
KISS gets in the spirit with their own, KISS Cold Gin: Here's where to find it